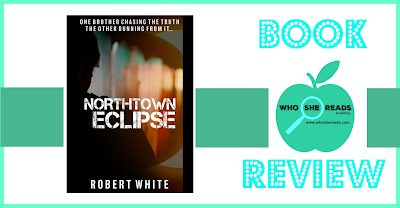 This is my review of Northtown Eclipse by author Robert White.

Author Robert White requested a review of his book and promptly mailed me a hard copy. After starting the book I went ahead and bought the e-book for the ease of reading. So I may do a giveaway.

The story was well written and edited with very few errors. There is profanity, adult situations, treachery, violence, cheating, murder and suicide in this crime novel leading up to the eclipse. And that is just the tip of the story. If any of these are triggers please read at your own discretion.

Author Robert White gives us a slightly broken and severely cosmetically flawed private investigator (no book boyfriend here my lovelies) whose fiery demons nip at him constantly. But none the less, a man with a sharp mind and fierce determination to get to the truth, whilst trying to save his brother.

Before we go any further I want to point out that this style of writing is called hard boiled. It's a tough, unsentimental style of American crime writing that brings a tone of earthy realism or naturalism to the field of detective fiction. It uses vivid and often sordid details of violence, sex and dialogue while using urban backdrops, small towns and undesirable locales to base the stories in.It can also be called noir or dark crime fiction. HEAs are not to be expected, just a finality to the ending.

Raimo "Ray" Jarvi- the MC and private investigator. Horribly scarred inside and out.

Rikki Jarvi- Raimo's brother, former high school football elite, addict and maybe even something more. Rikki what have you done?

Leotis Penniman- a client of Raimo's with a philandering wife. He kind of reminds you of the guy in the bible who's wife kept cheating on him and he kept taking her back.

Brian Toumey - the former high school bully douche bag golden boy with the cash, flash, success and a bevy of women. He has a secret he does not want found out. As the story progresses you may find that other adjectives come to mind.

Julie DeMarest- the home town hottie with a rep. "that girl" that marries and stays local with a mess of a life who somehow found time to become a med-surg nurse

There are a few other characters but these are ones you need to keep your eye on. 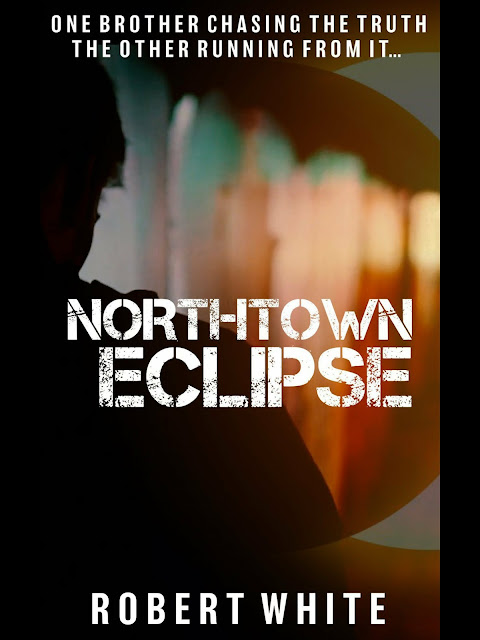 My two cents:
Technically speaking, this is a well written story. The story line, characters and plot were solid and well defined. Northtown Eclipse feels genuine, like it truly could have happened, not at all like a contrived fictional mystery. If you are a fan of crime fiction set in a small town, that's way more tumultuous and grittier than cozy mysteries, then this is a perfect story for you. Author Robert White gives us a villain with a seemingly golden boy trifecta complex. Good looks, money, friends in high and low places and a seemingly strong and unhealthy attachment to the MC's brother  A brother who needs saving in more ways than one. and a damaged underdog hero in the form of Raimo, a private investigator.

From the beginning of the story with extensive descriptive narrative surrounding  the air conditioner, to describe the hot mid-western summer to the unnecessary usage of the hated "N" word, and the mundane scene outside of the main character's office window to the crazy drunk or druggie who stares at him through said window with messages of impending doom; the author manages to craft a smart and tangible crime fiction story leading up to the eclipse while painstakingly and thoroughly, painting the drudgery of small town American living. A place where people are often mistook as under educated,  dreams are stagnated and high stake crimes are easily hidden or overlooked. A town where the locals are willing to look the other way in the wake of past moments of high school glory, the cool kids, the rich ones, who even after years of nothingness ride the tail coats of adolescent fame and are swept in by their perceived notion of what success, power and popularity look like. Welcome to Northtown.

The author purposely drags you along at a slow pace letting the story seep into your bones.
The small town degradation, hopelessness and feeling of insignificance of Raimo, permeate the story in a gritty grimy way that is almost palpable. But our fearless and determined Ray (as his frenemies call him)  just keeps going, like the energizer bunny....and going and going.....

It doesn't help that he slept with a dead woman (Wait, What!...got your attention now?)  and a horrific past trauma he endured continues to be an emotional, and at times, a physical stumbling block as he doggedly pursues the truth. There is a fair amount of action and the main character's life was actively being threatened and not just in words.  This is a complex conspiracy theory type of mystery. Not so much in the way of a who dunnit;  the author lets on who it is early in the story. The hard part, is that little thing called the burden of proof. Did a crime really happen at all? Unraveling the why and how of his suspicions puts the PI's life in severe mortal danger, several times.  He doesn't have the support of the local authorities which makes solving this crime and the ones to come a difficult task. But he doesn't quit. Ray just keeps going and going and going.....
By the end of the book there is a mountain of casualties and the villain....Well you will just have to read it to see what happens.

I felt it meandered through long winded definitions intricately woven into the backstory in an attempt to educate the reader, set the scene and build a connection to the character.  Which I understand is needed in a cleverly written mystery. But if I am to be honest, at times I  felt like I was wading through a sludge of deliberately ambiguous words as I  read this book.  I don't say it to say the book was bad, but I just had a hard time getting into it and it was not a page turner for me.

I  will say this,to the author: I thought the ending was a little anticlimactic. Raimo and Rikki used that weird guy way of communicating without saying much. I expected high drama when Raimo finally finds his brother, but I get the ending. I see you author Robert White. I see you.

I give this book 4.5 🔎🔎🔎🔎  strictly because it was a well written story and worth reading.
I didn't hate it ...but I didn't love it either.

My favorite line in the book:
"Hello, Handsome," the man said  (Because it's so f*cked up...when you read it you will understand)