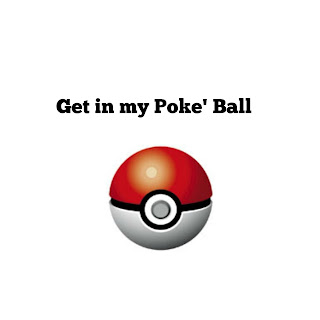 After overhearing the Pokémon video game craze return I decided to see what it was all about. I  remember buying cards for my son, watching Saturday morning cartoons, him sharing books about it and bleeding me dry for the games. Now its an android app on our phones? Say what?! This I have to check out! 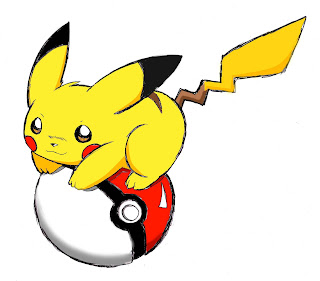 So I went to the Google play store to try to see what it required. Walking around and catching Pokémon.  My brain immediately said...this would be a good way to get in more steps daily. I have been trying to lose weight and get healthy again by riding my big red bike almost everyday in addition to eating a bit healthier, using shakes and natural teas and doing some exercise with weights at home.
As a black woman the first thing I noticed, as well as the hubby and the mother in law too,  is my disappearing badankadonk. Not a horrible thing as it has been like carrying around an anchor and has pulled me down several times recently.  The most recent was last night when I fell out of the bed.
Hubby didn’t even wake up. And when I  mentioned it this morning he asked if I  was hurt. I said no and he said well you had something soft to land on. Where's a poke' ball when you need one?

But back to the game. I started trying to play without knowing a thing about it. So I  wasted a few balls. I walked around my neighborhood in the middle of the night to see if I  could find any but had no real luck. The following day, we went to visit the in laws in Titusville but trying to catch them while being a passenger was harder than I  imagined, we were just passing them too fast.

Yesterday we had errands and I  am lucky because the hubby usually drives. I  had a horrible migraine and he took me the doctors office to get a shot and a RX but by the time we got out, my normal CVS pharmacy was closed. So they suggested a 24 HR Walgreens we usually do not frequent. We went but the prices were way higher than I  usually pay and the clerk stated there was a 24 hr CVS  a few miles away.  So we made the trip over. The prices were the same as I usually pay but they were Hella busy and said it would take an hour.  The hubby suggested we go to a Walmart not far from  there. So good, OK,  guess I could get in more steps.

I  noticed that my battery was draining faster than normal. So I  had to use the Samsung fast charger in the car.  I  also had to wait out server crashes earlier in the day. The hubby also shared some articles about some kids being shot at while looking for Pokémon. Be aware of your surroundings and have fun. People have gotten hurt (video)   Also be careful if it's on someone's property. 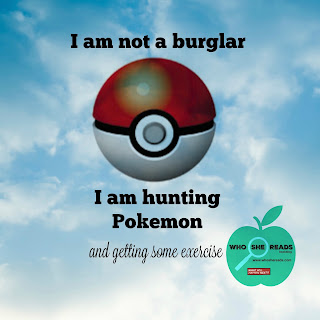 And others causing accidents while driving and biking. I plan on riding my big red bike and stopping at random places to see if any are in the vicinity. I can't see my phone while biking anyways because I uses a black basket to secure my things I take with me on my bike rides that zips up and is not see through. However I did see a cellphone carrier for the bike that you could attach to the frame just below the handle bars that was see through. Not sure if that would be a good idea though..  Again common sense and moderation goes a long way!.

As I  am  learning the game it's seems fun. The added benefit of walking is also great for my health. 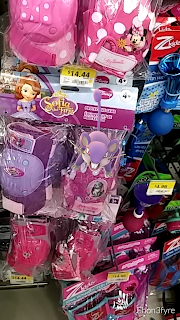 So we get to Walmart and I  head straight to the book section (always the bookworm)  then finally meet up to use the bathroom. I  decided to turn on the game as I came out and low and behold there was a Pokémon I had not yet seen.  I  had trouble catching it, so I  handed the phone to my hubby for him to catch it. He did after using my last balls. I followed him  to the bike section and then four Pokémon appeared all around me while I  was looking at bicycle accessories. Unfortuntely I had no balls and at that stage I had no idea how to get them. If I am to be honest, I was peeved my hubby lost my last couple of balls, but realistically I was losing some too.
So it looks like Wal-Mart is a good place to search for Pokémon. 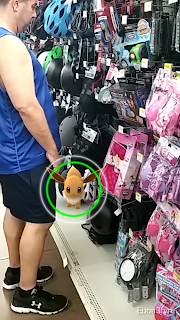 
Then I  remembered as we left the store and the Pokémon behind, that I  have Google play credits from doing surveys. If you are on an android phone like me (Sumsung Galaxy Note) install the Google Opinion Rewards apps. I wondered if I  could use the credits to buy balls and yep...I could. So I  searched some articles to see how to play and how to catch the Pokémon more accurately. So I  am not wasting as many balls. looks like you have to wait for the green circle to get very small to actually catch them so time your throws accordingly.

We made it back to CVS and still had to wait another 15 minutes. So I  used the time to get in more steps and look for Pokémon.  Just when I  was about to give up I caught one near the front register. So I  made my way back to the pharmacy to get my RX and the hubby says were you looking for Pokémon.  I said I  was getting in my steps.
What?! I was....and yes I  was searching for Pokémon too. ( hangs head in shame)

Then, of course the pharmacists behind the counter started a whole convo about out how much money he spent back when it was cards and Nintendo DS blah blah blah. I made my case that it's getting stationary gamers out of the house. Including people like myself who spend a lot of sedentary time reading and blogging if I don't have weddings or photography to do.

I  noticed that I cannot hit the back key to get out of the game,  I have to use the menu button and kill the the task that way. Oooo, and another bit of good advice- go to the menu section and check the battery save option in the game. You may also want to turn off the ar button.  The ar button allows for the pokemon to appear in the real world  and turning it off gives you a random cartoonish outside screen to catch the pokemon in. Believe me you will thank me later.

So we finally made it back home and I  turned it back on just as we pulled in the garage and low and behold there was one sitting on my purse on the floor.  I threw my poke ball and missed. Then it flew on my husband’s  arm , weird but ok. I asked him to hold still but missed again. It jumped on his shoulder and then it jumped into the cup holders in the back seat like it was ready to go for a ride or something.  I finally caught it, but thought if this is what people are doing while driving it is definitely going to be distracting and dangerous. 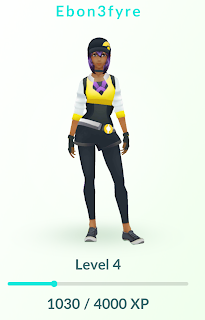 
The game so far has been fun and a good way to add some steps to my exercise regimen. But you definitely have to use common sense.   I am trying to get to level 5 so I can go to the gyms. There are two very close to me. So watch out whomever is the king of the gym...I am coming for you! (I will probably get stomped, but its all in good fun right?!) This is my character if anyone wants to link up. Definitely my new favorite mobile app game.

I have caught like 3 Pokemon in my home office. Just caught this one while doing this blog. Yes I am multi-tasking! 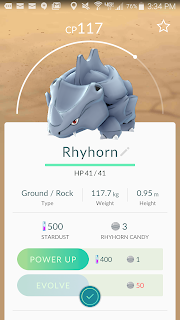 I am going to look into how to join teams next. 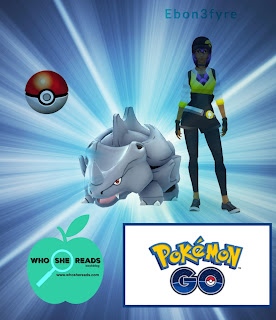 Android users- Sign up for the Google surveys and let your money accumulate to buy balls and shop for your Pokémon items. Not sure what to advise Apple users but I am sure you have already figured it out. This gamer girl is out! just barely away from level 5 YES!!!
Update-  I am now level 6 and at Level 5 they ask you to choose a team. Now gotta decide what team I want to be on. and I have increased my walking daily by 2-3 miles. Good job Nintendo!So I am finding higher CP Pokemon but they don't seem to want to stay in the ball after I catch them. Anyone have any good ideas on how to solve this?

Update- I am now level 8 and have picked a team. I am officially Team Valor  (or the Red team). I have found that feeding higher CP Pokemon Jazzberry makes them a little easier to catch. I am no longer wasting 5 balls they escape. You can get them at pokestops, along with balls, potions to treat wounds and revive your Pokemon, incense to attract more Pokemon, Lures, etc. You can also purchase them in the app.

Yesterday I was out walking while the hubby got his hair cut and came to a pokestop that was empty. I was a little disappointed because it was hot outside and it was a good distance (I was simultaneously walking to hatch eggs). Just to get there and spin and it literally was blank... so either it was in the process of being set up or maybe it was all used up?? Not sure. I still have a lot of Pokemon to catch and have started actively evolving them to get ready for battle.  If you are seeing a lot of the same kind, go ahead and catch them, then transfer them out to the professor for candy which you can use to evolve your Pokeman.


After all the walking and bike riding to try to catch them all I am going to need a nap hmm this looks comfy!
Watch the video
Now get one for yourself while it's on sale!
Outdoor Inflatable Sleep Bag Fast Open Lazy Sleeping Bed Air Hangout Camping Beach Sofa Portable Outdoor Lounger (Blue)