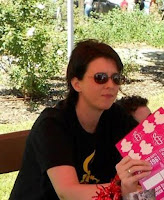 This author is passionate about telling stories that are often not seen or heard, real life experiences of demoralization, courage and survival. 25% of the proceeds earned on the sale of her books go toward the efforts of groups working to create happier endings. The pen truly is mightier than the sword. Stop by her site to help it could be someone you know and get a great book.


In the Author's words- Kids are my inspiration! 15 years ago I started working with homeless teens in the Seattle area and heard their heartbreaking stories over plates of lasagna and sloppy Joes. Some ran away. Some were kicked out. Some came home from school to find mom and dad gone. No one was looking for any of them. I decided someone needed to tell their stories and if I ever got into publishing it would be me. Ta-dah!
Few of them ever found happy endings and that's just as tragic as them ending up on the street in the first place. So, I give some of them that happy ending even if it's only on paper.

Any new projects?
I'm currently working on a spin-off book starring one of the main characters in my Saving Liam Series. It should be out in September. After that, it's on to a new story!


Who are your Favorite Authors?
There are so many and I find new ones all the time. Daniel Silva, Tami Hoag, Stephen King, Stephen White, Richard Kadrey, Laura Lippman, and the list goes on!

Where can we purchase your content and read more about you?
http://dpdenmanauthor.blogspot.com
http://www.dpdenman.com

Tell us a little about the book
Liam is not a family man. His past taught him to avoid the entanglement and its mire of expectations. Expectations he is destined to crush. Unfortunately, his boyfriend is pushing him into the arms of a new family and he’s fighting every step.
When a person he never expected to see again reappears, Liam finds a reason to make a few concessions for the sake of real love and the only man he is willing to call family. 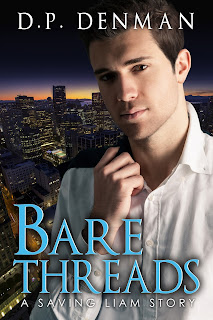 Can we read a little of it?
Optimism and anxiety sparred in his head, pulling his eyebrows into a knot while he transferred clothes from his suitcase to one of the drawers in the dresser.

“What?” Justin sat on the edge of the bed while Liam grabbed a pile of socks for the second trip.

He looked at Justin. “This isn’t going to work.” He stuffed the socks in a drawer.

“Avoiding the truth all weekend.”

“That I’ll be wearing more clothes in the next two days than I do in a week and a half at home.”

Justin took his hand when he was in reach, using it to pull Liam into his lap. “Nobody’s avoiding anything.” Justin wrapped arms around him. “It’s not that big a deal. So, you dance for people. I’ll admit, it’s an unusual career choice but, they’d treat you the same way if you were still waiting tables.”

He nodded at a speech he’d heard before and scowled at the carpet unconvinced. Fingers touched the side of his chin and turned Liam’s head leaving him no choice but to meet Justin’s eyes.

“If you plan to spend all weekend anticipating judgmental bullshit you’ll be disappointed.” Justin caressed his chin with a thumb. “They don’t blame you for something that wasn’t your fault.”

He stared into warm brown eyes and read the rest of the speech. This wasn’t his house or even his town. The hateful people he expected to confront lived one province over and they weren’t coming to dinner. Justin pulled him closer by the fingers on his chin and kissed him.

He smiled at the attempted humor and draped an arm around Justin’s shoulders.

“That’s probably for the best,” he said.

“Probably. Let’s finish unpacking before they wonder what we’re doing in here.”

“I could bounce on the bed a little to answer the question.”

“Always the tease.” Justin pushed him from his lap. “None of that this weekend, okay?”

Their first apartment had taught them about muting the volume during sex.

“I doubt anything you do could inspire an erection with my parents in the next room.”

Liam cocked an eyebrow at the challenge.


I can be found on these popular sites- Amazon/Kindle, Barnes and Noble, Kobo, Goodreads

Any Tips for aspiring writers?
Publishing is a lot like Olympic gymnastics. It's beautiful, inspiring, and effortless...from the outside. Reality is a different story. It takes a lot of work and sacrifice and there will be days when you wonder if you have what it takes to succeed. Even seasoned authors have those days. Hold onto your dream. Ignore the bad reviews...because you will get them. Don't let naysayers or grouchy bloggers erode your determination.