This week's theme is Ice

Neige Apple Ice Wine
Neige (which means snow) is made from apples harvested in the fall and pressed at Christmas time. Their juice is then kept outside in the freezing winter cold, in order to naturally separate the sugar from the water through the process known as cryo-concentration. This is the way we then obtain our precious syrup, which we let slowly ferment over a period of 6 to 7 months.

The color is a golden yellow with light reflections. On the nose it is pure and clean, the aroma of freshly-picked ripe apple with striking intensity. On the palate it's a crisp, flavorful attack. A perfect balance of sugar and acidity. Perfect as an aperitif or to accompany sharp cheese (Cheddar or goat) or veined cheese (blue), and desserts. Serve chilled

Save on more delicious wines from Wine.com

The Book Suggestion for this week is Ice Man Cometh (Jeri Halston Book 1) by C.T. Wente 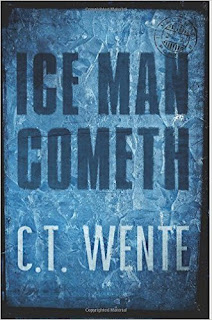 Jeri Halston should be working on Wall Street, not in a forgotten old bar in Flagstaff. But the brilliant, gorgeous twenty-six-year-old prefers bartending at Joe’s Last Stand Saloon to climbing the corporate ladder. When Jeri starts receiving love letters from an anonymous admirer, she’s amused by their far-flung postmarks and coy Polaroids that never quite show the writer’s face. Their postscripts are even more intriguing: “Don't order dog.” Hilarious but harmless, the letters don’t raise any red flags to Jeri—until a hyper-vigilant homeland security agent discovers that the letters are originating from places where the world’s top energy researchers keep turning up dead.
As the mailed missives turn from tame to threatening, Jeri realizes that her nameless, faceless pen pal just might have dragged her into an international terrorism plot. And there’s no marking “Return to Sender” on this nightmare.