the last book of the 2015 holiday reads

Thursday, December 31, 2015
Well my lovelies, we have made it to the end of 2015
Here is the final book suggestion of the year for the holiday reads.

A Player For Christmas 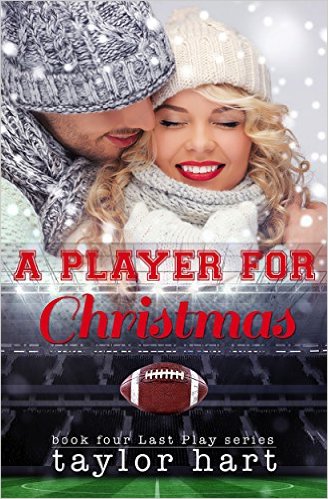 Brooks Stone, wide receiver for the Miami Surf, isn’t the type of guy to make dreams come true; he’s too busy dealing with a high ankle sprain and the anniversary of his wife’s death.
Callie Given, a cancer patient at Primary Children’s Hospital, only has one wish for Christmas—dinner with Brooks Stone. He flatly refuses, until Sam Dumont threatens to make sure the coaches bench him if he doesn’t comply.
Ana Given thought fighting for her daughter’s life was enough of a challenge. She never expected famous football player Brooks Stone to actually show up. If he was a friend of her ex-husband, he’s definitely not someone she wants hanging around her daughter. Good thing she sends him away. Too bad her daughter sees him before he can leave.
When Brooks and Ana find themselves on a quest to find Callie’s father, neither would have imagined getting on a plane together, going to a cage fight, or…kissing. Brooks wonders how these two women have become everything to him in less than seventy-two hours.
Now he has to make a decision—get what he wanted for Christmas or become the player he was always meant to be.

Get the rest of the series on Amazon