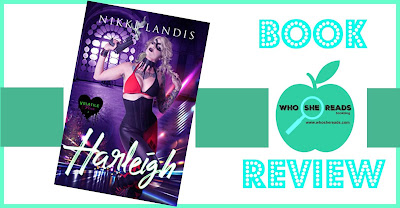 🍏Hello there Who She Readers!

Today my lovelies I have for you another book review! So pour yourself a cup of coffee or better yet a glass of wine...I won't tell if it's something stronger(it's 5 o' clock somewhere). Grab a snack and buckle up babes. This book will take you on one hell of a ride! Let the insanity begin!

This is my review of Harleigh: Dark Paranormal romance (Volatile Vixens book 1) by author Nikki Landis.

I was given an ARC in exchange for a honest review. This book is an edgy dark super villain fiction romance story with elements that may remind you of fan fiction retelling. (although the author definitively states it is not fan fiction).

But to readers (and at the off chance of stoking the author's ire...)
if it walks like fan fiction and reads like fan fiction....its probably... well... you know. There is consensual and barely consensual sexual content, aspects of mental disorders and brutal violence. This story may contain triggers so reader be wary. This book and review are written for 18+ readers.

This is my second book by this author.
So who's ready to dive right in?!


This story starts off with our main character Harleigh about to celebrate her 25th birthday. A self professed die hard Harley Quinn fan. She dresses up like her and basically emulates her idol from head to toe. She even fantasizes about meeting her perfect Joker. Someone as broken as her but totally devoted. Everyone dreams of a bad boy right?! I need a gansta...by Kehlani playing in the background.

Harleigh Quinlan- aka Harley Quinn -  Harleigh (Leigh)  is fucked up. I mean, not just a little bit either. She is beset by nightmares, anxiety attacks and the fact that she is recovering from a recent mugging. No wonder she's ripe and ready for a one way ticket to nutsville. But its not her fault and that's only the recent stuff. This character has a deep seeded darkness in her that she, at times,  fully embraces. She can be stubborn and determined but she has a cavern of loneliness that needs to be filled by the right sort of person. She is a little cuckoo for coco puffs. And I am not talking about the delicious chocolaty kind. She is volatile.

Devon Quinlan - aka - Blaze/Blue Fury is Harleigh's brother and self appointed protector. He is more than just her brother.

Derek  Masterson  - aka-  Onyx is tasked with protecting Harleigh by her brother,  his sexiness is not lost on her. He's hot. He has secrets. And a wicked tongue.Who will protect him from her?

Ivey - aka-  Poison Ivy is Harleigh's best friend and I quote directly from the book "her ride or die bitch" But this bitch has been keeping secrets too.

Mickey Sharp -Chaos - he runs the rebellion group the Syndicate

Vicktor Blackstone- aka- Joker, son of Silas Blackstone,  a tormented young man, cursed by his father's shadow and has his own dark secrets and vested interest in Harleigh.

Silas Blackstone - aka- The Collector , Evil Mastermind, scientist and creator of the Collective. 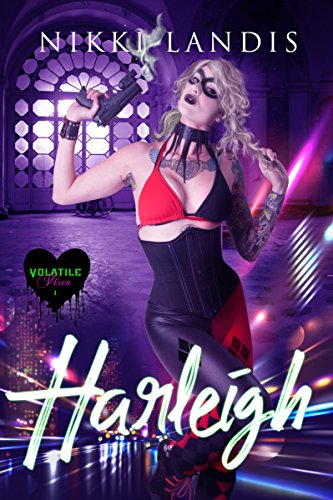 My two cents:
The author warned me that this book was dark.
It is.
But not in a way that leaves you covered in its aftermath like some stories. Shaking in a corner with your knees up rocking back and forth. My advice? Just go with it.

It's a bit of a crazy wild ride. Like the roller coaster that scares and exhilarates you while you are on it and when it ends you want to do it again.  Harleigh has barely embraced her dark side but I expect it to grow as the series continues. She is walking a fine line between the darkness and the light. This is the first book in the series. So more dangerously dark, twisted and violent book reading deliciousness is on its way.

This story is entertaining and the author did a good job at keeping everything important a secret until just the right time. She fills the spaces with action, mystery, adventure, death and sex. There are some heart pounding swiping moments.

It's a dark fiction told in Harleigh's POV.  This is a quick read and a fast paced, volatile story. We are privy to all of Harleigh's chaotic, destructive volatile thoughts and actions as well as her moments of complete and utter vulnerability in her quest for love and self identity. (A glass of bi-polar any one?)
Oh yeah,... she even has her own theme music playing in her head. No...Seriously! I shit you not!
She spends a good portion of the book trying to figure out who, what and how she is supposed to be, while trying to avoid her pursuers. Remember, this is a paranormal tale so escape isn't exactly easy.

The supporting characters all know what's going on. Harleigh is in danger and basically running for her life when she finally is given a snippet of a clue.  Her brother Devon says it wouldn't have done any good to tell her ahead of time what was going on. Really Devon...really!

The characters are scarily well developed in all their heinous psychotic glory and though this a dark fiction it is also a romance story, because hey...everyone needs love.  You will find yourself wanting to compare the characters with well known super villains but I think you will find this story is a new take on an old franchise. It's just different enough to etch out its own niche existence of super villains and possibly heroes.  I liked the premise and its a good read and I would definitely tell you to go get your own copy and step into the world of Volatile Vixens.

Head on over to Amazon and get your own copy. Also check out the totally awesome and darkly appropriate playlist  the author compiled.
Welcome to the dark side.  Ah... ha... Ha...ha...ha...haaaa (in Joker's laugh)

So I  am off to check out her vampire series, 'cause you know I  love my vampires. Catch you on the next post!