Book Review: Theirs to Pleasure 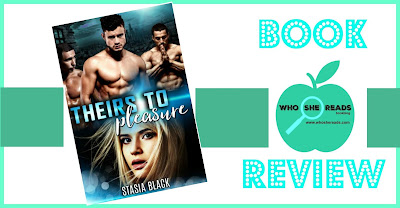 Hello my lovelies.
This is my review of Theirs to Pleasure by author Stasia Black.

This review and book is written for 18+. If you are scared or easily offended...kindly exit stage left.
Theirs to Pleasure follows the intensely action and schmexy packed dystopian reverse harem romance book Theirs to Protect in the Marriage Lottery series. Theirs to Protect was my first foray into RH so I  was over the moon to be picked to read and review the next book in the series. I was given a copy of the ARC (yay) in exchange for a honest review. I am such a lucky girl.

I. Honestly. Love. This. Series!

So the series takes place in what we currently call the Central and Western United States. There are few women left after a virus wiped almost all of them from the face of the planet. Bombing destroyed a good portion of everything and everyone else. So the ratio is about 1 woman to every 12 men.  Yeah...I know what you are thinking! A different guy every night of the week. No? Just me then ....ok! But lovelies it's a crockpot recipe for disaster. This is book 2 in the series.


There are lots of twists and turns. This story will keep you guessing, hoping, cheering, getting pissed off and really heated. The special safe haven NOMANSLAND (Yeah ....I know ...don't even. I am sure the author rolled on the floor when she decided the name for this place.) for women is no longer safe. As you recall in the first book, Audrey barely escaped.
Shay is a captive and tasked with bringing Charlie sparse meals. They develop a bit of a tentative relationship leading to them working together to get out of the deplorable conditions known as Travisville. Charlie and Shay escape from Travisville and head out to Jacob's Well in hopes of finding Charlie's sister Audrey and freedom. In addition, hopefully a chance for Charlie to explore his feelings with Shay. They finally make it to Jacobs Well and bam! Shay is immediately put in the marriage lottery. Her one condition? Charlie is one of her five husbands.

Shay's group of guys was quite different from Audrey's men.

Shall we meet them?

Henry- Projects eloquence and refinement, has an affinity for the finer things in life. Let's his past define his present in a way that makes for an unhealthy ambition and proclivity for wealth.

Jonas- A closet dominant, a former preacher who has lost his way, disguised as a pothead and is carrying past  hurt like a freaking ghost strapped to his back. (That's a movie reference) A bit on the Judgy side.

Charlie- Audrey's brother from the first book (Theirs to Protect) Thought dead but was being held captive in Travisville. Escaped with Shay. Has fallen hard for her and only wants to protect and not fail her. He is genuinely a good guy. You will definitely like him.

Gabriel- A gracious, devoted and humble, man who just wants to have a family. There is more to his story but I  want you to be just as surprised as Shay when you find out what it is.

Rafe- WYSIWYG. ( what you see is what you get) Nothing pretentious. A little rough around the edges. He holds nothing back. Doesn't let anything slow him down. You either like him or you don't. 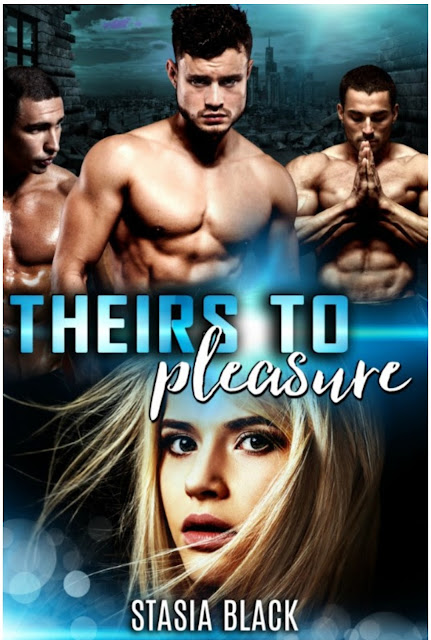 
Keep your eyes on these characters:

Sophie - makes several supporting role appearances in both books. She is The Commander's daughter and official welcome party to all new females entering Jacob's Well. She is sheltered but kind of has that daddy's little girl syndrome vibe going on. Let's just say she is going to be something else when she is eligible for the marriage lottery.  I suggest you look away Commander. Look away.

Arnold Jason Travis - This fuckin' psychotic crazy as a fox maniac. He somehow managed to eek out a position of power after The Fall. He is young, brash, crude, evil and a master of psychological warfare. He rewards his men by appealing to their baser needs. Let men think they can do what they want without repercussion as long as they are loyal to you and I guess they will follow you to Hell in gasoline soaked undies. I found myself asking how this happened...kinda like this past election....what too soon?!

Shay is a survivor.
There is so much more to this character, but I want you to experience the genuine waves of emotion for yourself as she reveals her true self throughout the story. I wanted to like her. I really tried. Her character is complex. I can't say that I hated her... but let's just say we won't be going out for coffee. However, at points in the story, she solicited my pity, my admiration, my disappointment and a full range of other emotions. Her name may sound like a sigh but she has them all catching their breath at one time or another. She also owns her sexuality and is un-apologetically unashamed of asking or demanding what she needs. Shay is shFeisty. (Sorry... I couldn't help myself)

I liked that author Stasia Black gave us a damaged heroine with a stubborn streak and a long game survival instinct who took her pleasure seriously. Sometimes the virgin thing is just ridiculously played out. The guys were equally tarnished. All of the characters were well thought out, very well developed and believable.

Bravo for the new bit of sexy this book took on. This group's dynamic is interesting and the back stories, along with what is going on in the moment, will have you swiping almost faster than you can read. I am so hoping there will be more coming soon. Sophie is coming of age soon, so maybe a story there? Hint, hint.


Also author Stasia Black, just want to throw out there that I am a little disappointed in a decision that Jonas made. I mean, I get it, but I don't have to like it.  So I hope in the future there is a fucking fantastic comeuppance to make up for it.
Don't judge me...Read the book and tell me you don't feel the same.
Also someone ended up with twins in their lottery... I think that warrants some extra exploring
...maybe a novella or side story or something...just sayin'. TWINS!!!!


Fast paced, action packed and just wow. A really good story. Great characters and steamy romance.
There are a few grammar errors but nothing too bad that it takes away from the story. 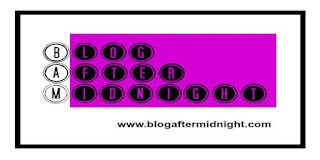