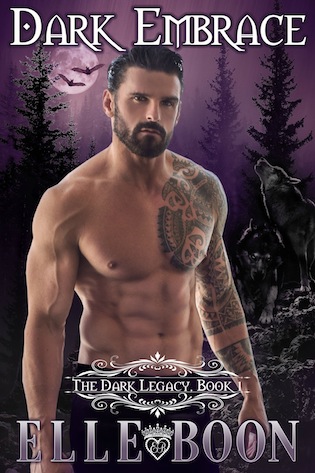 
A DARK LEGACY where only the strong survive and those who are Goddess touched can complete the warriors who fight to protect the world from the creatures that go bump in the night.
DARK EMBRACE
Jennaveve, the Fey chosen by the Goddess to be the queen of her people for the past few millennium, is tired and wishes for a break, but hadn’t counted on being reduced to almost mortal thanks to a dark stranger. They say you should be careful what you wish for. The last time she’d taken a break, her Fey had left their realm, resulting in shifters on Earth known as the Mystic and Iron Wolves and even more she was still searching for.
Damien and Lucas Cordell knew they’d share a Hearts Love when the time came. As the twin sons of the Vampire King who’d mated a shifter, they were the first of their kind. When they’d thought their mate was finally within their reach and was a shifter like their mother only to realize she wasn’t theirs, they’d almost lost their lives to the alpha of the Iron Wolves, Kellen Styles. Instead, the error led them to the being that was…the Fey Queen Jennaveve. Only she was even more elusive than the wind.
Time and patience was something Damien and Lucas had in spades, until the female they’d already laid claim to, even if she hadn’t accepted them yet, was taken by an enemy. Saving Jenna became their one and only focus. As time and realms slip between them, their fear for her had them forgetting about patience and made claiming Jenna as their Hearts Love, hoping she accepted their Dark Embrace.
Will the Cordell Twins be able to rescue Jenna from the evil who has taken her? Will Jenna get her powers back? Who is the dark presence and how will they defeat a being who is strong enough to bring the Fey Queen down to her knees? 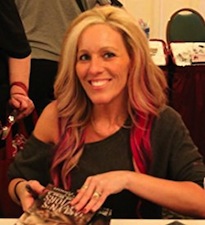 Author Bio:
Elle Boon lives in Middle-Merica as she likes to say...with her husband, two kids, and a black lab who is more like a small pony. She's known for her penchant of dropping F-bombs like a boss, needing coffee before she's human, and blessing so many hearts, she is going for sainthood.
She'd never planned to be a writer, but when life threw her a curve, she swerved with it, being that she's athletically challenged and all. She loves where this new journey has taken her. She writes what she loves to read, all things romance, whether it's erotic, contemporary, or paranormal, as long as there is a happily ever after.
Her biggest hope is that after readers have read one of her stories, they fall in love with her characters as much as she did. She loves creating new worlds, and has more just waiting to be written. Elle believes in happily ever afters, and can guarantee you will always get one with her stories.