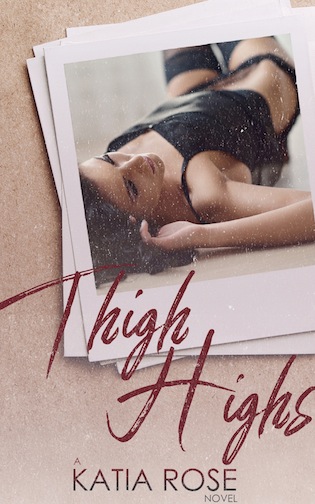 
Modelling lingerie for her arch-nemesis was not on Christina’s to-do list.
Then again, neither was he.
Aaron Penn might be the talk of the advertising school they both attend, but to Christina he’s just an egomaniac with a cocky smirk to match. Fast forward to the end of term, when a class project gone wrong has her stripping down to a negligee and letting Aaron photograph her to advertise a line of women’s underwear.
She expects suggestive comments and smarmy-eyed stares, but when Aaron gets behind the camera he treats her body like a work of art. Even though all she’s got on is a scrap of satin, the room suddenly feels way too hot.
As the tension between them builds to expensive-panty-melting-levels, Christina finds herself caught between falling for the complicated artist who knows just what poses to put her in, and wondering why he acts like such an irritating hotshot around everyone else.

Author Bio:
Katia Rose is not much of a Pina Colada person, but she does like getting caught in the rain. She prefers her romance served steamy with a side of smart, and is a sucker for quirky characters. A habit of jetting off to distant countries means she’s rarely in one place for very long, but she calls the frigid northland that is Canada home.