Book Review: Sins of the Father 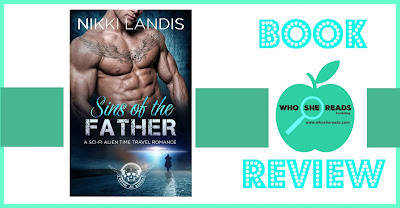 I was tingling with excitement when I was given the opportunity to read this work from author Nikki Landis. I had not read any of her writing previously and was thrilled she allowed me the opportunity to read my first full length MC book. The cover on the book....Scorching!
I saw the enthusiastic MC book groups and thought what am I missing here?

Then I read the first few pages, and admittedly, I was on the fence.
All of the pre read book excitement drained away in the initial violence. Honestly, I did not know what to expect between the pages of a Motorcycle Club romance and obviously was woefully unprepared. So I paced myself with this book. I could have easily finished it within a week but because there were so many layers, and it kinda resembled another sub-genre I am not that fond of,  I had to read it in bite size pieces.

It reminded me of urban romance (the ghetto kind) with thugs and drugs, gangs, murder, crime and rape and a lot of the things that I don't particularly care to read about when I escape into a book. I had the unfortunate experience of living in an area where that sort of lifestyle was commonplace for a few years. I just have little to no desire to rehash. This Motorcycle Club Romance is gritty and raw. I guess it feels too real at times.

To be honest-I feel a little green as you are probably thinking well duh what do you think a Motorcycle club is  My answer to that is I never really considered it.

Don't get me wrong, the book was a fucking good read.
I loved how the story was told. Author Nikki Landis is one hell of a writer. ( I am gonna definitely check out some of her other works)
Sins of the Father. It was well written, had all the right elements to a great story line and  there were more secrets and danger than should be allowed to be packed in one book. I was constantly holding my breath as danger seeped in with calculated accuracy from every side. I mean these poor characters never got a break. Speaking of which.... 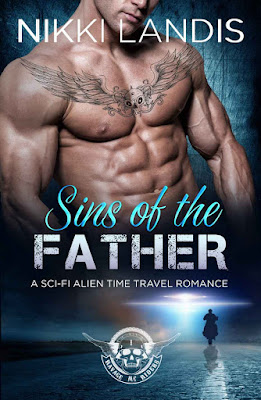 
Let's meet some of the characters:

Peter 'Edge' Harding - The main character, we meet him after he has patched and in the middle of some serious shit going down that will come back to haunt him later in the story...He knows it so no spoiler there. He is the son of an ostracized Mack, both are shrouded in some fair share of mystery. He loves Rae down to his soul and will do anything to protect her. Totally alpha.

Rae Stenson- the girl and now young woman that Pete has pledged his heart, soul and protection to. She is fiesty and in real danger but doesn't know just how much or why. The author does a good job of keeping the reader in the dark as well. She lost her father and has a shit for brains step dad who is all kinds of not right. So its her, her mom and young baby half sister.

Charles - The Shit for bains step dad. What did they call him? Vader I think. personally I was cheering for his exit stage left as soon as he entered the storyline
R.J.- Pete's best friend and has the feels for Rae....No worries, he stays in his lane...mostly
Rafe- This POS...  oh and he is the Pres of the MC (and that is all I am gonna say about him)
Striker- He is just a nasty SOB and he is Bryce's old man (notice how most characters named Striker are usually bad guys?  X men much anyone?)
Bryce- He has some serious moments of ass holey-ness. But he has a secret. Sorry I can't tell you what it is because...well... its a secret.
Mack- Peter's old man
Ron-Rae's father. a founding member of the MC and seemed like a great guy and father

There are other characters, but these are the ones to keep your eyes on.

My two cents:
The book told a complete and very satisfying story and did not leave me with a freaking ridiculous cliff hanger....I love to hate those. Don't you?! I got what felt like a realistic view of MC life.
Every question was answered in a big reveal. All of the characters were distinct; the character development was on point. The element of danger lingered throughout the story like a relative who didn't want to go home. The sex was doled out appropriately and fit the age that the characters were.
Sins of the Father was a really good book. I felt satisfied, thoroughly story-fucked if you will, at the end of the book. I am going to read the next book in the series when its available.... because...hey...aliens?! I do love my paranormal.


I noticed that the paranormal alien element was dosed out super sparingly. I mean they out right alluded to it as a feeling of sorts but it didn't feel like the normal time travel paranormal romance.

So when you read this book and I know you will... hang on because you are in for some crazy, hella fast paced story telling. Then there are the bits in the moments of calm that are just ...like ....wow and have you with the serious feels. This story has more layers than an outback blooming onion. But they all get peeled back and the plot is exposed. The HEA is granted, even though it kinda feels like a HEA for now type of situation.

I am still on the fence about the MC sub-genre as a whole. I am not sure it will be in my top picks for future reads now that I have had a taste of the MC life. I don't hate it. But I don't foresee any MC romance binge reading in the near future.