Cover Reveal:Saved by a Soldier

Saved by a Soldier by Alison Mello 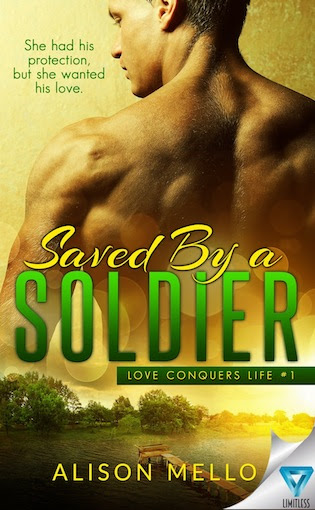 
Patricia Ann Fitzgerald is no man’s arm candy…
Refusing to entertain her mother’s ridiculous notion that she should become the perfect little housewife for her ex-boyfriend Ben, Patty escapes to her father’s lake house to focus on what matters most to her. She has to break through her writer’s block and start her next book.
Medically discharged from the service and suffering from PTSD, Carter Montgomery is still trying to get his life back in order…
When Carter’s father Jackson suggests a week at the lake, it’s not only so he can gain a little clarity about his future. Jackson has other plans for his recovering son, intending for him to watch over his best friend’s daughter while she’s on a solo writing retreat—an idea that doesn’t please Carter at all.
Patty finds it hard to get any work done when her attention keeps diverting to the handsome stranger next door…
Patty is persuaded to attend a charity event, despite knowing her ex will be in attendance. When Ben rudely interrupts Patty’s dance with her father and drags her off the floor, Carter is quick to intervene. He’s tired of admiring Patty from afar, and refuses to see her treated that way. Ready to ditch the stuffy event, Patty escapes with her savior someplace where they can finally talk.
Ben always gets what he wants, and he isn’t willing to let Patty slip away…
Patty fights to preserve her blooming relationship with Carter from the critical eyes of her mother and the scheming ways of her ex. Will Carter manage to get his life back in order in time to save Patty from the life she never wanted? 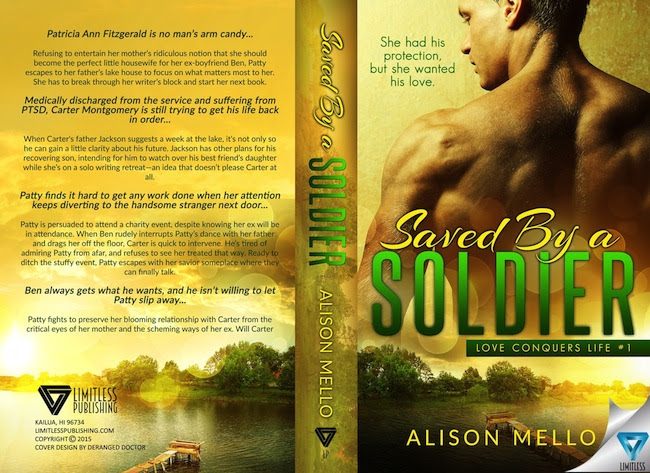 Author Bio:
Alison Mello is a wife and stay at home mom to a wonderful little boy. She lives with her amazing family in Massachusetts. She loves playing soccer, basketball and football with her son.
After having her son, Alison started reading again and fell in love with Contemporary Romance. Reading made her happy and gave her something to do when she had downtime. As she started to read more, she started to noticed things she really enjoyed in a book and things she didn’t. She began to have ideas for writing one of her own. One day she literally woke up and started writing. She realized that if there was ever a time for her to write, it was now. She had a part time job to give her something to do. The hours at work were slow and she was bored with what she was doing, so while her son was off enjoying his friends over summer vacation she got started.
Alison finished the first book in two weeks and decided that she really enjoyed writing, so she kept going. She already had ideas in mind for books two and three, so she kept writing. That is how the Learning to Love Series was born. Somewhere along the line, one of my Beta readers convinced me that Michael, a character from Finding Love, needed his own story. That is when Alison added the fourth and final book. Alison hopes you enjoy her books as much as she enjoyed writing them.
She’s so glad she started this writing journey and hopes you will stay with her for the ride. Chasing Dreams is scheduled to release in April and the first two books of the Love Conquers Life series will be out this summer!