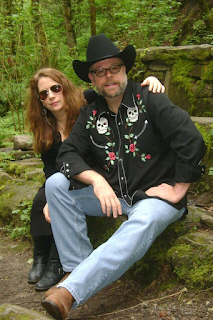 In the Author's Words ::
This first edition of A Very Unusual Romance  was
published in 1999, long before Twilight kicked the vampire craze into the
stratosphere, and when e-books were merely a dream in Jeff Bezos' amazing
brain. Back then, it was Anne Rice, Buffy the Vampire slayer and Tucker and
Lizzie, entertaining a niche world of vampire fans. The first edition went
out of print in 2000, but the publisher re-issued it in 2010, to catch
Twilight coattails, but without much fanfare. Since then, the authors have
written  three more books in the series, released under their own imprint.

The books feature two main characters: Tucker and Lizzie. Tucker is a
hard-luck cowboy from tiny LonePine, Wyoming, just trying to scrape
together enough cash to keep himself in whiskey and his overly-sensitive
dog Rex in kibble. Lizzie is a reporter from New York, with a short fuse, a
growing reputation as a rising star in the world of feature journalism and
an ancient, undead secret in her blood. The series follows their
relationship as they try to navigate an unlikely romance while fending off
threats — both physical and existential — from the vampire and human world.

The opposites attract story line appealed from the outset because of the
authors' unexpected and explosive romance  - Tucker and Lizzie became
almost proxies to explore the powerful currents, pitfalls and shadowy
corners of our own relationship. Clark is a real cowboy, raised on a
5000-acre ranch in Montana and Kathleen is from the middle of Washington,
D.C.

The thing that often surprises our readers is how witty the books are, in
between the action, passion and horror.

Title ::
The Cowboy and the Vampire Collection: A Very Unusual Romance

So what's it about? ::
Welcome to LonePine, Wyoming, population 438, where the best of the west faces off against the rise of the undead. It's a love story for the ages when a broke cowboy and a glamorous big city reporter
fall lipstick over boot heels in love. But she carries a 2000-year-old secret in her veins that will test their unusual romance to the very edge of death, and beyond.

Saddle up for a hilarious, sexy, existential gallop through the dying American west with an army of ancient bloodsuckers in hot pursuit. 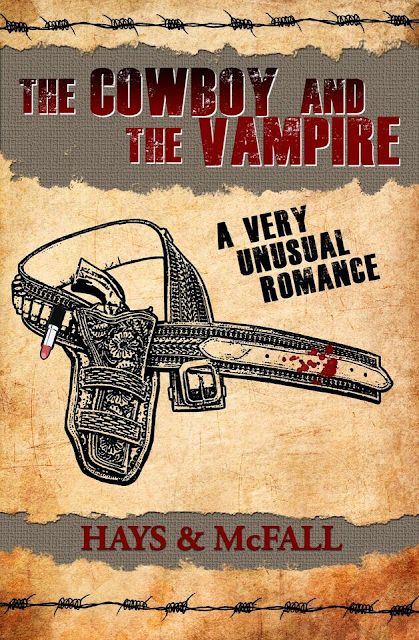 get your copy today

Book Sample ::
Julius stood in the doorway of the apartment. The
darkness from without and within met in him and he wore it about his
features like a cape and cowl. He cleared his throat and one of the men
already standing inside turned toward him.

Julius sucked in a dry breath. “Your passion for so eloquently stating the
obvious never ceases to amaze me.”

“It is not supplication I desire. I merely want to know where she is.”

“Julius,” a voice called from deeper inside.

She stepped from the bedroom holding a note in one hand and a struggling,
hissing cat in the other. Her emerald eyes blazed from the shadows and a
pearl neck-lace looped around her throat glinted faintly, almost lost
against the marble skin exposed there.

“Perhaps,” she said. “I found this in the bedroom, a note detailing the
feeding procedure for this delicate creature,” she said nodding at the cat,
“named Felix.”

“Hello, Felix,” Julius said as he stroked the terrified creature’s head,
moving his hand as the cat lashed claws at him. “It would appear the queen
has fled the castle.” He arched an eyebrow. “The question is, where might a
frightened young thing seek sanctuary?”

“We can rule out family since she has none.” He smiled tightly. “But the
photographer seems an obvious choice. Elita, take two and see what you may
find.”

She stepped past, dropping the note to the carpet, but holding the cat
tighter against her chest. “Poor thing must miss his owner,” she said,
stroking it softly. “I followed it home,” she said to Julius. “May I keep
it?”

He nodded and, in the silence of her departure, pointed a slender finger at
one of the shadowy figures remaining. “Are you familiar with this type of
machine?” He pointed to the darkened computer sitting impassively on the
cluttered desk.

“Then make it work on my behalf,” Julius said, taking up a position behind
the chair. His attendant turned it on and the screen flared to life,
lighting the dark room with pale indigo.

Manipulating keys and mouse pad, the vampire scrolled through files
scanning document titles until Julius tapped his finger to the screen.

“Correspondence. Let’s take a look at that one.”
Letter after letter flashed across the screen, mostly pertaining to
business.

“This is getting us nowhere.” He dragged his finger down the screen.

“What exactly are we looking for, sir?”

“What we are looking for, my young acolyte, is a clue. A name. A
destination. Wait, what’s this?” His finger rested on a name. “Why, it
seems she kept in contact with her little cowboy.” He smiled. “Isn’t that
sweet. She has a hero.”

He snapped his fingers. “Desard.”

An impossibly thin vampire with a crooked smile detached himself from the
shadows to stand beside Julius. “Yeah, boss?”

“Find out where,” he studied the screen, “LonePine, Wyoming is. When Elita
finishes, I want you two to take a little trip. Take as many as you like,
but don’t come back without Elizabeth Vaughan.”
,

What's on the Horizon? ::
The last book in The Cowboy and the Vampire
Collection - The Last Sunset -- will be released June 9! We are also
working on a new series -- more traditionally a mystery series -- and are
very excited about it. Still with the opposites-attract element, of course.
The third book in the series (Blood and Whiskey) was named to Kirkus
Reviews best books of 2014.

Where can readers purchase your books or content? ::
Amazon, IndieBound, www.cowboyandvampire.com

Any tips for aspiring writers? ::
Write, write, and write some more. It's often torturous, but that's the foundational truth. Sit down and write. Now. Go ahead and do it. Now.

Find their book on  this site ::
Amazon/Kindle