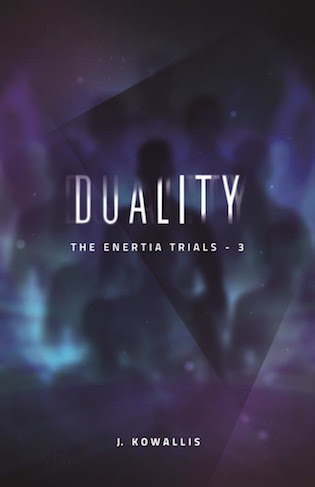 
Book 3 of THE ENERTIA TRIALS
Trust No One.

In this world, nothing is as it seems . . .
Reggie’s visions turn to horrifying hallucinations. For weeks she’s tortured with starvation and nightmares that vex her resolve. Her only companion is a mysterious shadow—a figure with no shape, no substance—that seems to have a mind of its own. It’s a presence that prickles her memories and plants a feeling of familiar dread in her mind.

Where she is, she doesn’t know, and the organization delving into her mind is more threatening than ever before.
With the help of shady contacts from his past, Nate struggles to travel half way around the world, facing his own demons and dreadful revelations. But when a stranger joins the team, the duality of this newcomer’s actions sets everyone on edge, leading them through a trial one of them . . . will not survive.

Add to Goodreads
Previous books in the series: Author Bio:
J. Kowallis, the only girl of four children, grew up in northern Utah with a head full of wild stories (most often unreal). At the age of 9, she wrote her first poem, a dedication to E.B. White’s Charlotte’s Web. It was so intriguing, her third grade teacher requested to keep the original. Between living in various fictional worlds, and spending time on her studies, she managed to graduate from Weber State University’s creative writing program. She now lives in Utah with her Mini Schnauzer, Etta, and spends most of her time still bouncing between this world and the fantastical while enjoying delectable über-dark chocolate and lavender baths. She enjoys dreaming about, flying to, and writing about distant lands (real or unreal).