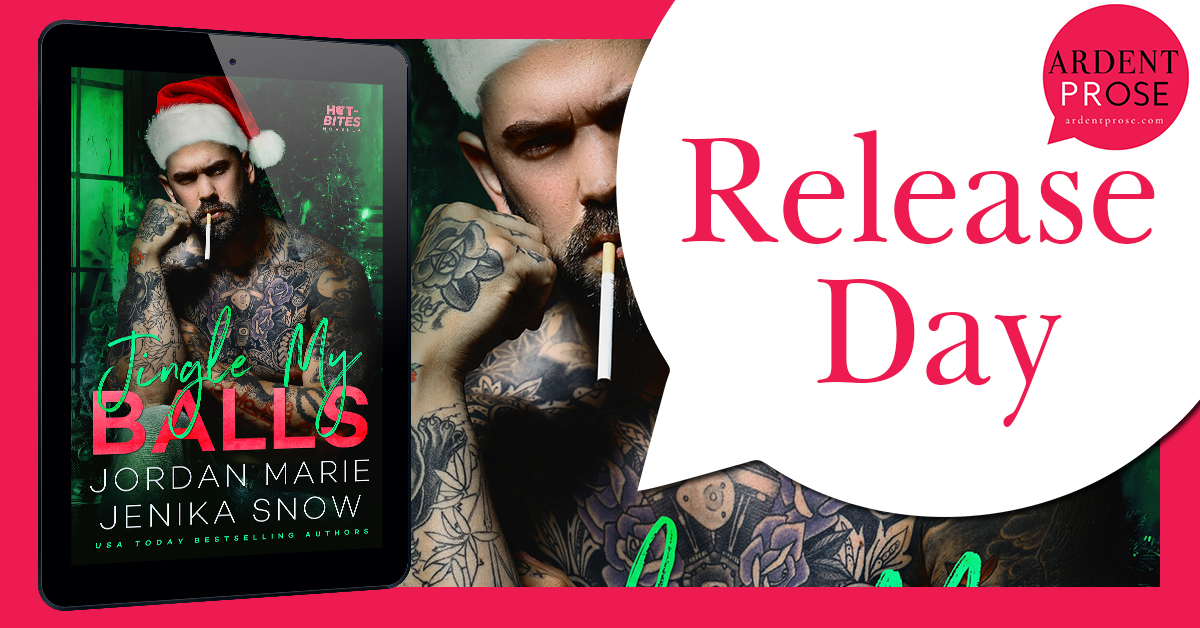 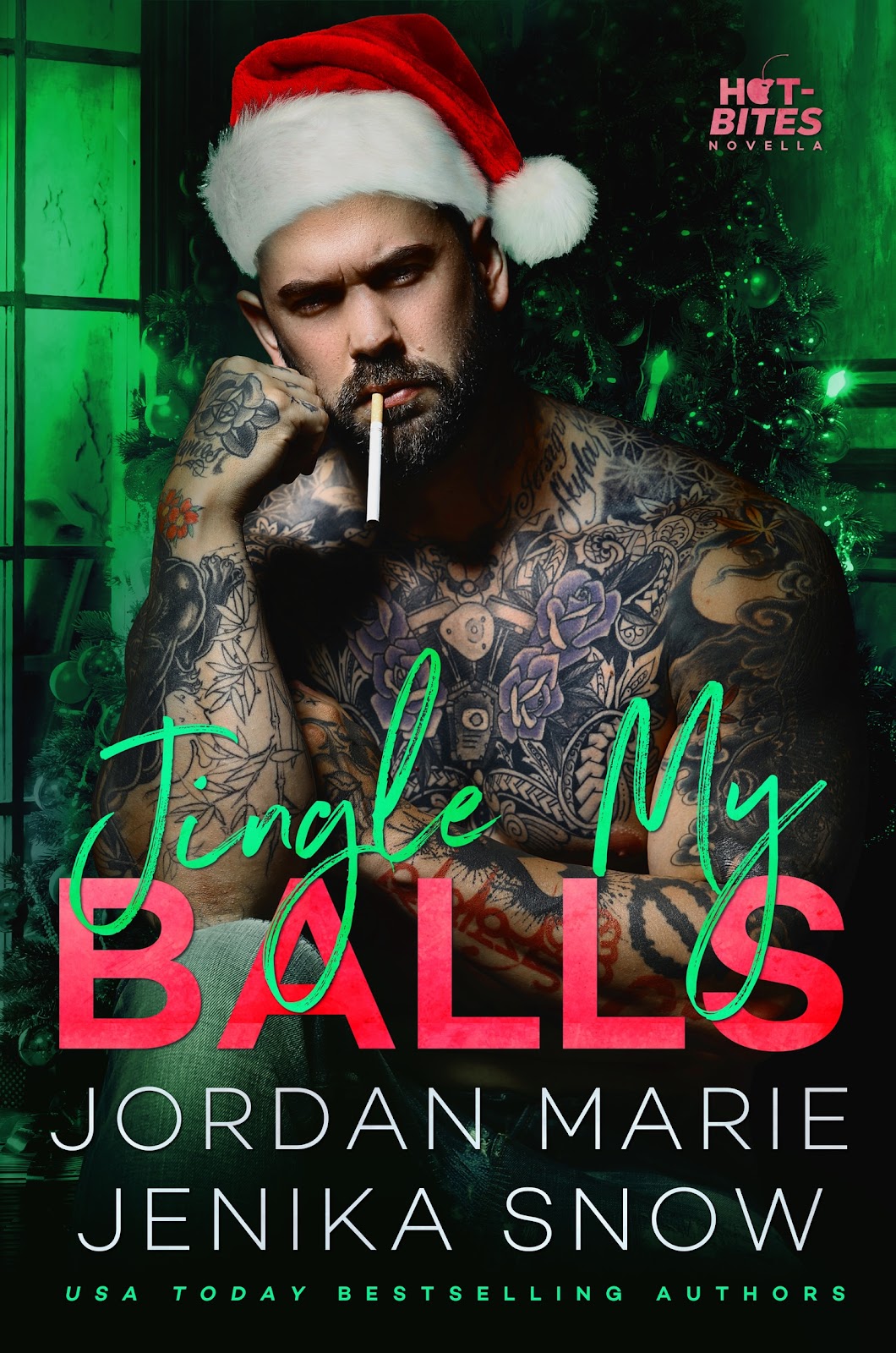 My firm has been hired to make sure Holly gets her biggest Christmas wish.
The rules are simple:

Seduction and fantasy, and absolutely no sex.

But, the moment I get a look at the delicious redhead all rules go out the window faster than Santa’s sleigh on Christmas night.

I shouldn’t touch her, but it is the season of giving, after all.


And I really want to give Holly a night we both will never forget.

The problem is, once she wraps that sweet little tongue on my candy cane,


I want much more than just one night.

Warning: Welcome to Jenika and Jordan’s Hot-Bite Christmas where the packages are big, the stockings are definitely hung, and snow isn’t the only thing that gets plowed. We’ve decided you’ve been good this year, so pull up a chair and enjoy a quick, dirty little cup of Christmas Cheer.

If I hear one more Christmas carol, I’m going to hurl. That’s it. I hate this time of year. It’s cold, it’s miserable, and people are just plain rude. I tried Christmas shopping today—I really did. Fifteen minutes in the store with holiday music playing in the background, people pushing and shoving, getting mowed down by shopping carts, and I was done.

Which is why I’m limping on the sidewalk, with not one shopping bag to show for my trouble. Some woman inside the department store ran into me with her cart. She didn’t apologize; she just huffed, like I was the one who caused the accident.

I find a bench close to the park and sit down to inspect the damage. I bend down to look at the back of my leg and wince at what I see. My stocking is torn and there are these gigantic runs in the nylon going up my leg. The heel of my foot is bloody and has been ripped open at the exact spot the back of my Jimmy Choos slide against. My favorite pair of heels didn’t exactly escape hell either. They’re scuffed and have serious damage. If I had it to do over I wouldn’t have walked away. I would have given that lady a dirty look and thrown my shoe at her before giving her the finger.

“Looks like you’ve been trampled by Santa’s reindeers,” a deep voice says to my right. I turn and look at him and everything in me stills. Chills run down my back and the voice seems to vibrate in the very center of me, sending instant awareness through me and making my body hum with need. Which is unusual for two reasons. One, I’ve been on a break from relationships and men in general for the last five years. My last breakup was not good—so not good that the thought of trusting another male scares the hell out of me. The last and most obvious reason is the one that takes precedence, however. I don’t know this man. I don’t know him at all and worse… He’s wearing a Santa outfit.

“Do I know you?” I sound like a cranky old bitch right now, but I’m not in the mood for some guy dressed up to try and get me in the holiday spirit, not matter how good looking he is.

I rest my back against the bench and look at the stranger, feeling my eyebrows lift up in sarcastic disbelief. Yeah, he’s wearing a Santa suit, a cheesy red one that looks like it’s made out of crushed velvet and that’s trimmed in white fake fur. I suppose that’s not strange; ‘tis the season and all that. What doesn’t fit the part, however, is when he yanks off the beard and hat and pulls off the white gloves, I can see that his large, masculine hands are covered in ink.

I draw my attention back to his face. Now that the fake beard is gone I see he’s sporting a black beard with a bit of gray sprinkled in. Dark, almost obsidian eyes stare down at me. They look intense, mocking and yet at the same time somehow bored with life. He pulls out a cigarette and then lights it, cupping his hand against the cool New York wind.

“I don’t think Santa is supposed to smoke,” I tell him.

“Sweetheart, Santa does a lot he’s not supposed to do,” he smirks and something about that look on his face makes my body heat.

“Whatever. You should make sure your boss doesn’t see you do that,” I mutter, annoyed because he’s making my traitorous body react when it shouldn’t.

“Santa has no boss.”

“God, can you drop the act? I’ve about had it with Christmas and the last thing I want to do is hear you tell me how you spend your days on the North Pole playing with your reindeer,” I huff.

“I make the elves stroke my reindeer horns actually,” he smirks. “What’s got your panties in a twist?”

“You mean besides being mowed over by a woman with a cart and ruining a pair of pantyhose and my favorite pair of heels?”

“Who was she? I’ll put her on the naughty list,” he asks and at this point I just shake my head.

Who is this guy?

“Will you give it a… What are you doing?” I feel my eyes grow big as I watch him get down on his haunches in front of me.

“I thought that was rather obvious. I’m checking your injury out,” he murmurs, ignoring my protest and pulling my leg up into his lap—despite me trying to pull it away.

I brace myself on the bench, because if I don’t, I’m going to end up falling to the ground. I try to kick at him, but he holds my leg firmly, not allowing the movement.

“Will you stop? I don’t know you! And besides that, this dress is too short. You’ll have me flashing half of New York.” My voice has risen by this point.

“Stop being dramatic. My body is completely blocking you.” He dismisses my objection and then he looks at me—really looks at me. His eyes bore into mine, and his hand on my leg becomes tighter, almost punishing in his hold. “Are you wearing panties?” he asks.

My body jerks in reaction. I should be repulsed. In fact, I should be panicking that a man I don’t know, a man dressed in a Santa suit, with a cigarette trapped between his lips and his big—huge really—ink-covered hand wrapped around my leg, is asking me if I’m wearing panties. What I should not be is turned on. And, if my damp panties are any indication… I am definitely turned on.

“You did not just ask that!” I cry out, desperately trying to pull away from him. I can’t be turned on by a stranger—a very weird, sexy as sin stranger. I cannot be talking about my panties with said stranger and most of all, I can’t spread my legs a little wider for him.

“Black… nice,” he says almost to himself, obviously having looked at my panties. I’m not sure how much he can see because of my pantyhose, but despite it all I feel my face heat, even though the air has a wintery chill to it. “Damn, honey, I’d say the shopping cart won your war,” he mumbles around his cigarette, yet somehow managing to make each word clear.

“Will you let go of my leg please?” I growl out, unable to pull away from his firm grip. I’m thinking that what I thought might be padding to fill out the Santa suit is actually just plain muscle. If his hands are anything to go by, he’s huge.

What is it they say about large hands again?

I squirm uncomfortably. I really shouldn’t be thinking about that at all.

A QUIRKY WRITER GOING WHERE THE VOICES TAKE HER.USA Today Best Selling Author Jordan Marie, is just a simple small town country girl
who is haunted by Alpha Men who talk in her head 24 hours a day. She currently has 14 books out including 2 that she wrote under the pen name Baylee Rose. She likes to create a book that takes you on an emotional journey whether tears,
laughter (or both) or just steamy hot fun (or all 3). She loves to connect with readers and
interacting with them through social media, signings or even old fashioned email.

Jenika Snow is a USA Today Bestselling Author that lives in the
northwest with her husband and their two daughters.
Before she started writing full-time she worked as a nurse.