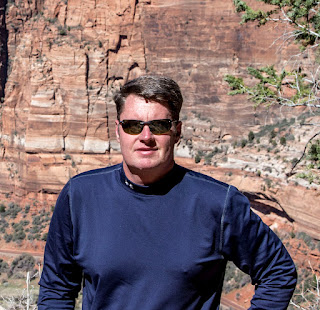 In the Author's Words :: I write to expose human strength and frailty.  I write to help myself understand the human condition on a deeper level and convey that to others.  I am intent on enjoying the full experience of the
story as both the driver and passenger.

Much of what I write comes from my own experiences and what I've observed of others around me.  People want to know which characters are me and who the others are.  They are all me and all none are me.  They express ideas and actions from my mind. Yet they take on a life of their own.

I write fiction in the hopes it would be considered literary in quality.  I write to entertain, but my goal is to move people.  To make people think a bit about themselves and the world around them.  My book is not a light read.  And I wouldn't want it any other way.  So dive in...

So what's it about? :: This novel details the journey of a man trying to
cover 2,000 miles from Nevada to Texas after a huge solar flare knocks out
all power grids and communications around the world.  Richard Evans begins
to awaken from years of depression as the world goes dark. Each encounter
reveals more about him and the new reality of he world around him. The
story moves with action but hits a deep emotional chord with the reader,
from smiles to tears.

With permission I have been allowed to share his copyrighted work with you on my site. Please contact the author through his website before using any of the work seen here.

Can we read a little?:: In this excerpt of Ch 2, Richard Evans is spending the
night in the desert after a long day of work:

The moon appeared as the faintest sliver of light, while the rest of the sky radiated with the glow of a billion stars pouring down out of the firmament. The sea of light actually defined the black disk of the moon with its conspicuous absence of light. Richard loved space as a kid and dreamed of traveling to other worlds when he was a young boy, not knowing any better.  David thought the same way. He remembered sitting out in the backyard with the little boy on his lap, answering all the questions like, "Daddy, can we go to the stars someday?"

"I would like that. Then could I see our house from up  above?  Could I see you in the yard?"

He wiped tears back as they cascaded down his cheeks. Richard thought to himself, Well David, I guess you made it.  You beat me there. I love you son.

The deeper meaning of life occupied his mind, and for once in many years, he didn't sink back into depression. One more good breakfast at the cafe with Dale and he would be on the road. The survey work was done, even if it cost him a night in town on the phone. Richard considered how he hung up on
the phone call with Julie earlier in the day, "This waiting sucks. I'm sorry. It's been so long already,  I suppose one more night won't make a big difference anyway. You may not even care anymore..."

As he lay back down onto his pillow and drifted off into a peaceful sleep,
he didn't see the waves of green and blue wash across the sky from the north. While he slept, the
colors intensified and danced until they traversed the entire night sky.

For the first time in history, all the great cities of the world fell into darkness at once. Huge swaths of light vanished from the dark face of the Earth as vast power systems and computer networks failed. Only a few isolated places remained with electricity as waves of intense energy from the Sun washed across the small planet. Those who remained awake watching the news now drew in deep breaths as lights flickered and quit, leaving them alone in the darkness. Many other people awoke  to complete stillness and silence after air conditioners, fans and other equipment ceased to function.

People stepped outside their homes into darkened streets where blackness stretched as far as the eye could see. A few exceptions existed as backup generators powered important buildings like hospitals, but only until the fuel ran out. For the first time, many inner city children now realized beautiful stars inhabited the skies above their homes too. The momentary wonder of it all gave way to uncertainty as the question of when power would return weighed on everyone. The virus of panic moved swiftly from person to person, free to grow in the absence of light.

Now began the desolation of civilization's green mountain. Nourishing rivers of power ceased to flow, while mountain lions lurked in the shadows, sensing their time had come to prey upon the unprepared world around them. The run on  stores throughout the day degenerated into looting and riots as technologically advanced cities provided the most ancient form of man-made light, fire.
© Lance Haynes


What's on the Horizon? :: Working on finding an agent at the moment.
Everyone says the story should be a movie, so there's that avenue too.  I
am looking into creating some video blog content to support the books and
talk about the trials of life from an "in the mud" perspective.  I have 3-4
more novels set in the Solar Maximum world, so I need to get to work on the
next story too...That and figuring out how to make a living...

Where can readers purchase your books or content? :: www.lancehaynes.com,
under the store link.


Any tips for aspiring writers? :: There is no formula.  Maybe probabilities of what would work, but no formula.  Don't try to be someone else when you write.  Get the story down on "paper" and then worry about getting it to look right for the world.  I wrote a good book.  I didn't outline, storyboard, or use an editor.  And the worst crime of all, I don't have time to read books.  I work on many things.  But I don't read books.  I read life.


You can find more content by author Lance Haynes on these sites? :: Amazon/Kindle, Barnes and
Noble, iTunes