Every weekend in July, She Reads Writer Spotlight Authors brought amazing new books and authors to the blog. Writers share every genre monthly from Romance, YA, Christian fiction, Horror, Fantasy, Thriller, Suspense, Paranormal, LGBTQ,  fiction, Erotica, Sci Fi and Poetry. Just in case you missed any of the interviews on Writer Spotlight  or books for July here is a quick Writer Spotlight Recap. 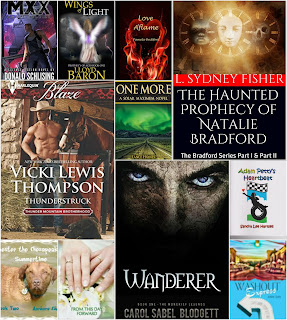 See the interview here
The world of Atlantia is in danger. For thousands of years a dark and forbidding prophecy has told of the end of the world. Three times it has almost come to pass, leaving the lands broken and in chaos. Now, on the eve of the Feast of Lights, the Prophecy of Ages is about to begin again and it has chosen a simple weaver to herald the last few turnings of world.

See the interview here
MXX is born into the galaxy's darkness and forged by its heartless cruelty. Trusting only his gun and the edge of his knife, MXX becomes one of the galaxy's greatest and most feared agent soldiers as he claws for his share of the scraps the Unified Governments leaves behind.

G Whitman From This Day Forward
It's June 10th and today is a day in the life...For Bree and CJ it's their wedding day. Young love that starts with all its promise. For Michelle and Ryan it's their second anniversary. They have a young baby and one on the way. Can they handle it?     See the interview here

L Sydney Fisher The Haunted Prophecy of Natalie Bradford: The Bradford Series Part I & Part II BASED ON TRUE EVENTS

On December 21, 1974, Liz Bradford was murdered outside the prestigious Rex Plaza Motel located in Elvis Presley's hometown of Tupelo, Mississippi. Her husband, Devon Bradford was also involved in the shooting and transported to North Mississippi Medical Center where he first crossed Natalie Houston's path. She was his operating room nurse, and she had no idea that within three years she would be married to a killer     See the interview here

Chester is one loveable dog.  In this second children's book of the Chester the Chesapeake series, Chester's new brother, Putt-Putt, thinks summer is for watching TV!    See the interview here

A poetry collection for lovers    See her interview here

See her interview here
Adam Petty had a passion for children. In this book you will see the camp that Adam Petty started. This camp for seriously ill children is a place to remember. Children can come to camp free for a week out of the Summer.

See her interview here
Young, beautiful, and vibrant! Teresa Camellias was once a woman from Compton that all the men adored. Easily belittled by the crime and atmosphere soon erupted Teresa's poor mind as her mom forced her father away and became corrupted by drugs!

Beyond the wall of computers, all the books rested. Perhaps I belonged to every one of them. Fiction: Immortals aren’t real. Romance: I had a lovely wife who I adored. Horror: She died, in my bed, with my best friend.  See the interview here

Damon Harrison never gets too involved. A cowboy at heart, Damon has turned his commitment phobia into a living—flipping houses. The only exceptions to that rule? His foster family at Thunder Mountain Ranch.   See the interview here

How much can the human spirit take? Richard Evans will find this answer as he searches for answers in the high desert of Nevada while searching for a path out of financial ruin after years of loss and failure. What he discovers is something altogether different.  See his interview here

See the interview here
Bailey Brown has just lost her job, her birthright, and her fiancé. Loaded with enough insecurities to fill a suitcase, she prays for God to show her the way and then hits the road feeling like the ultimate loser.

See the interview here
True Confessions of a Libertine is Creole Gaudet’s memoir.
It is eight cleverly detailed vignettes filled with conflict, sex, eroticism, deceit, betrayal, and romance.
Creole Gaudet, a playboy, a dedicated bachelor for life, a perfunctory panderer, a libertine.