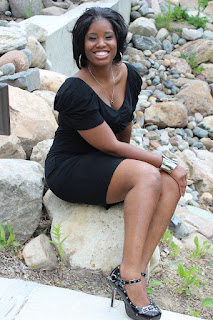 
In the Author's Words :: I'm a hopeless romantic and a sucker for a good love story. I'm big on happy endings, especially with so few in real life. I write romance to give people hope...to show them that fairy tales are real!

So what's it about? :: Piper is missing. With Christian-the last one to see her alive and well-unknowingly becoming a suspect in her disappearance, Cynthia, Bobbi, and Alana go searching for answers as they race against time to find Piper before it's too late...

When his own skeletons begin to fall from his closet, Christian regrets every horrible thing he's ever said to Piper, and prays that she is okay and that she'll have him again...

With permission I have been allowed to share this copyrighted work with you on my site. Please contact the author through their website before using any of the work seen here

Content Sample :: "Okay wait, slow down. Come in the damn house first. Both of y'all can't talk at the same damn time." Cynthia ushered Alana and Bobbi into her home and quickly shut her front door behind them.
"It's Piper, she's missing. Have you spoken to her in the last few hours?

We think something has happened to her. There's blood--"
"Wait, Lala stop. There's nothing wrong with my sister, she's okay. I would know if she was in trouble. I mean, I'm her big sister. I would've been able to sense it." Cynthia ran to the coffee table next to her couch,
grabbed her iPhone, and punched in her sister's name.
"Cindy--"
"No Bobbi. Piper is okay. She has to be," Cynthia whispered as she hit redial for the second time and walked off into the kitchen.
"Shit, I knew we should've waited until after we tried to go to the police to tell Cindy," Alana said, sounding defeated.
"Yeah but we would have never heard the end of it if we had went and done that and she found out. But Lala, I'm telling you, it wouldn't have made a difference if we had went to the cops first, because we have no proof that
anything has happened. We need proof before we go to them first."
"But something has happened Bobbi, we should at least go to them to start a paper trail. I will never forgive myself if something happens to her."
"Piper is a fighter, Lala. You know that. If she is in trouble, she'll get out of it. And you know her guardian angel is watching over here. Her mom has never left her or Cindy's side. So let's not even think anything negative." Bobbi grabbed and squeezed Alana's hand in assurance.
"Did Christian call back yet?" Alana asked.
Bobbi slid her phone from her back pocket and checked the screen.
"Nope, still nothing. But you know what, I tried calling Neal back at
Piper's, but had to hang up. I'll call him back now and see if he knows where his brother is, and if he knows if Piper is with him."
"All right. I'm going to go back here and try to calm Cindy down, and then
we'll go from there."
"Oh wait, this is Neal now. Hello?" Bobbi said as she walked out outside.
Just then, Cynthia came rushing back into the front room.
"Okay, we're going to make a police report and then we're going to see
Jackson's friend, who's a detective, to see if he can help us off the
record. Then we got to get a hold of Christian to see if Piper is with him
or when he saw her last."
"Bobbi is on the phone trying to find that out now."
"Cool. Good. I'm driving. Lala, search my phone for Heather's number and find out if she knows anything," Cynthia said, handing over her phone as they headed toward the door.
Alana had just found Heather's number when text message came through.
"Cynthia--"
When Lala opened the door, Bobbi walked in looking completely disturbed.
"Bobbi what's wrong?" Cynthia asked, her voice trembling as she tried not
to fear the worst.
"Neal said he talked to Christian earlier, said he didn't want to talk, but
Neal gave me his number anyway. I called him and he said he hadn't seen or heard from Piper since they got into it yesterday. I told him that she may be I'm trouble and to meet us at the police station, and he said fuck her, he don't give a fuck and that's what she gets with her trifling low down
ass. Then he hung up on me."
"What?" Lala asked in complete shock.
"Oh really, his punk ass said that shit about my sister and something might've happened to her? And Piper would move Heaven and Earth just to make that hoe smile? Fuck naw. That bastard got me fucked up. He bout to see low down. Lala, grab the muthafucking bat. Bobbi, call and get ahold of
cousin JonJon , tell him we got a job for him. How dare he disrespect my sister like that? How dare he?"
©India Norfleet

What's on the Horizon? ::
My next two upcoming projects are:
Billionaire Girls Club Spain
My Bad Habit 3

Where can readers purchase your books or content? ::
http://www.amazon.com/s/ref=nb_sb_noss_2?url=search-alias%3Ddigital-text&field-keywords=India+norfleet

Any tips for aspiring writers? :: No matter what anyone says...believe in yourself and don't be scared to step out on faith!!!