La Gerla 2010 Brunello di Montalcino - Sangiovese Red Wine
Red Wine by La Gerla from Tuscany, Italy. Brunello La Gerla is known and valued for its special elegance and pleasant aromas; extremely aromatic, soft and velvety to taste, aged in the bottle for at least eight months before being made.Intense ruby red in color, with a harmonious, velvety texture. This wine is delicate, fruity and fragrant. Pair with first courses, roasted or grilled meats, particularly beef and pork. 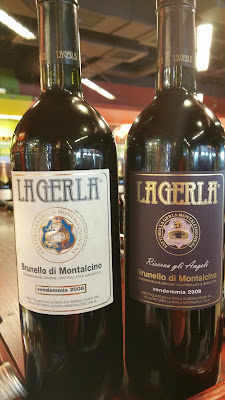 
If you would like to learn more about the region and vineyard this wine comes from, here is a great book.

Your book suggestion for today is A Song for Bellafortuna: An Inspirational Italian Historical Fiction Novel by Vincent B "Chop" LoCoco

A Song for Bellafortuna is an inspirational Italian Historical Fiction novel concerning a young man’s desire to free his Sicilian village from the domination of one family’s long reign. For years, the beautiful, yet secluded, hilltop village of Bellafortuna, Sicily, was a great producer of wine and olive oil. The entire village prospered. However, after the arrival of the Vasaio family, production dwindles and the villagers soon find themselves in crushing debt to the Vasaios. Only one family in the village remains outside the control of the Vasaios, but the reason haunts Antonio Sanguinetti every day of his life. Antonio is determined to erase this legacy by offering financial and emotional support to his fellow villagers. He introduces them to the choral song from Verdi’s opera, Nabucco, which becomes the rallying cry for the villagers and offers them hope for a better life.

When Antonio’s only son, Giuseppe, discovers his family’s past, he becomes determined to take on the Vasaios and remove them from power. Led by the young Giuseppe, a plan is hatched that could result in either complete freedom for the villagers, or if it fails, forever solidifying the Vasaios’ control.

The novel has been called lyrical, intelligent, majestic, magical, powerful and compelling

For the love of reading ....So many books - only 2 eyes- SL Thomson
Would you like to have your wine or winery showcased? Go here for info #WWAB