This series was published in 2014. ~Tales of Ever is an action packed young adult novel, enjoyed by adults and teens yet also suitable content-wise for readers 10 and up. Originally written as a novella series, it has been reworked and is now available as a complete stand alone novel. So it's time to take a second look at this series. Enjoy!

Tales of Ever by author Jen Wylie (Volumes 1-6) 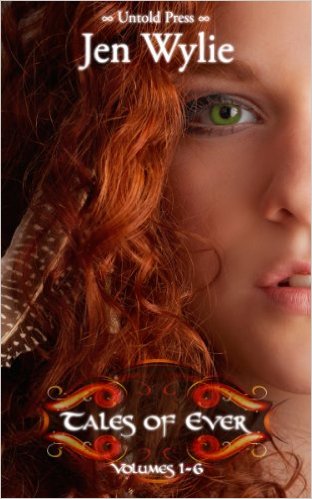 Lose yourself in Ever

A few months ago, I was a normal girl. Life sucked, and just like everyone else, I took the simple things for granted. At least until I got this new power, a "gift" my mom called it. Apparently, I'm a firestarter. I didn't want to be. I didn't ask to be. It would be cool if it wasn't so dangerous and I knew how to control it. When an uncle I'd never heard of showed up to take care of me after my mom died, I should have been grateful. As it turned out, my whole family isn't normal and more than a little bit crazy. I thought things couldn't get any worse. I was wrong.
They banished me to Ever.

Ever; a deadly realm where feared, powerful, and dangerous magical beings are banished. It's not a world, but a magically created prison you can never break out of. Who, or what, made Ever? I've no idea. They were powerful, and cruel. That is all I can tell you.
Ever is like, and unlike, every other world. Nothing is safe. Safety is a dream. Ever is a nightmare. Few survive their first day. Nothing is what it seems. If something appears safe, it isn't. If something appears dangerous, well it is, but probably more than you think.
Ever has no sun, no moon, and no stars at night. Time is told by the ever changing color of the sky where portals open, dropping new inhabitants or new terrors. Time does pass. Don't worry, you won't get old. You won't live that long.
The landscape changes without reason from desert to jungle. The flora isn't safe at any time. There is food, if you can find it without getting eaten yourself. Most plants and animals are poisonous. So is the water.
Are you afraid? You should be. This is the end. It gets worse of course. Remember the portals? Do you think angels come through? Innocent people rarely do. Mostly, it is evil people, people too powerful to kill. Their magic works here. The creatures are worse.
Do you understand? Well, you will eventually, or you'll die. There is no escaping Ever.
Ever. Get it on Amazon

For more second Look Books and authors click the logo below