What Lies in Shadows  by author Siena Noble 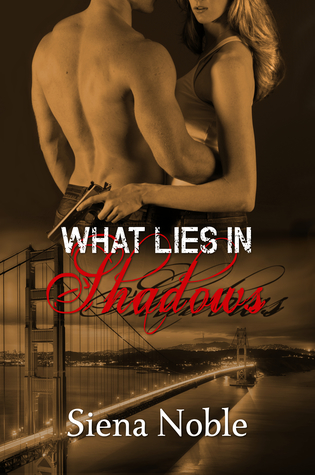 
Ten years ago, former San Francisco police detective Daniel Yun lost everything when he lost his beloved wife and partner, Christine, to the very serial killer they were hunting. Now a private investigator, Dan has done his best to move on with his life, burying himself in his work and being a devoted uncle to his nieces and nephews. His weekends are occupied with a succession of boring blind dates and a long string of willing submissives, but the one woman who has managed to creep into his heart is the one woman he can’t allow himself to have: Heather, Christine’s best friend.
Since the brutal murder of her best friend, homicide detective Heather D’Angelo has dedicated her life to keeping the city safe from scum like Christine’s killer. Between her stressful job and the demands of being a divorced single mom, Heather has little time for romance, preferring the familiar company of Dan… and the occasional Saturday night at the local BDSM club. But no Dom can compare to the man whose touch first awakened her hidden desires years before: none other than Dan himself…
For nearly a decade, the man believed to be the San Francisco Slasher has been behind bars, until a vicious killing all too similar to Christine’s forces the police to reopen the case, and Dan to confront all the fury and pain he thought he’d buried long ago. When the trail of the Slasher and Dan’s latest case converge and lead straight to the city’s BDSM community, he and Heather find themselves working intimately together, bringing their long-suppressed passion to the surface. But as they fight feelings stronger than friendship, the body count continues to climb, and the Slasher isn’t the only threat they face. Only together can Dan and Heather overcome the demons that have haunted them for so long, especially since the killer may be far closer to them than they ever imagined…

Author Bio:
A proud Pittsburgh, PA area native, Siena Noble has explored and inhabited all kinds of fictional worlds through her writing since age ten. Although she’s always been a sucker for a good love story and possesses an incredibly dirty mind, she never imagined that her publishing debut would be erotic romance. What started as a silly short story idea quickly became something much bigger, a demanding Master of a manuscript whose every whim Siena submitted to.
When she’s not busy reading, writing, binge-watching Game of Thrones, or doing a million other important things, Siena enjoys traveling, archery, and getting lost in the woods (also known as “hiking”). She and her better half/writing buddy/sometimes Sir/sex muse live together in Pittsburgh. Their dream is to relocate to the middle of nowhere and build a castle capable of withstanding the impending zombie apocalypse.