Sunday, January 10, 2016
As we shucked off the end of 2015 with hope and new goals, my new year has brought death and tragedy. After my dad died on NYE 2015, a few days later my mother in law had a stroke and still remains paralyzed, and barely able to move or speak, and today one of my sons got in a bad car crash that totaled their car. They say bad things come in 3's so hopefully the rest of the year will be golden. - written Sat 1/9/2016

Today is the day that they will lay my dad to rest.

Over the past week, I have been assailed with many emotions.  Some days were better than others. Needless to say my migraines were ratcheted up 10 fold. I was not particularly close to my dad. Nor most of my family for that matter. So honestly,  I  assumed I would not feel much of anything. When the call came on New Years Eve I was calm and rational. Accepting.  That could also have been due to the Grapefruit beer I had enjoyed as a treat to myself to ring in 2016.

I realized earlier this week that in grieving, I give life to the hurt and anger, the what ifs and could have beens.  The potential missed opportunities for future reconciliation, past transgressions.  I  realize that death lays bare  emotional wounds and we grieve not for them but for ourselves. Selfishly we make it about us.  My step brothers and sister carried the weight of making the arrangements and cared enough to see if I wanted to attend,  though I told them I had nothing to offer. If it were left up to me, I  would not attend the funeral. To some, I probably sound like a horrible person. But my husband says that I  may regret not going and is driving me to make sure that I attend.

I  honestly don't know how watching other people mourn someone who actively participated in their lives,  created memories with them and helped them through crisis, but was not there for me,  is supposed to make me feel better. Give me closure. It would seem quite the opposite would be true. Each random person that now reaches out to me with stories of experiences they shared does not make me feel better. It's like a kick in the gut. I  have literally no happy memories to fall back on that include him. Not one. Not one. This is me letting go.

So I resign myself to say goodbye. My last memory... a text that I sent him that said Merry Christmas with no response back.

And because at the end of the day this is still a book blog My book suggestion is;

Saying Goodbye by Diane Amadeo and 7 other authors 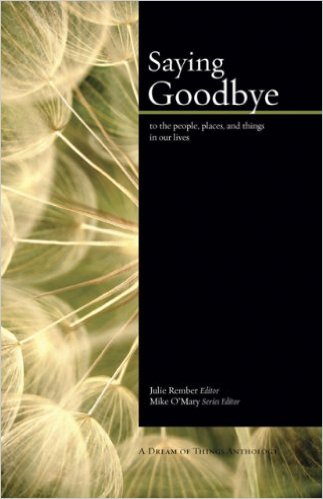 
Saying Goodbye is a collection of true stories about saying goodbye to the people, places, and things in our lives. The stories are universal. They are incredibly powerful and moving. And they are surprisingly uplifting and cathartic. "The stories are about love, really, not sadness," says one critic. "Despite all the sadness and grief that come with saying goodbye, there is love and joy and comedy on the Other Side." Says another: "If you have ever had to deal with loss, read this book. It will make you feel better."

These stories show that there is sadness in goodbyes, but there is also irony and humor. We cry about the sad stories, we laugh at the funny ones, and along the way, we learn valuable lessons about how we say goodbye -- sometimes under the most difficult of circumstances. We learn because the contributors are unflinchingly open and honest when it comes to sharing very personal stories about how they and their loved ones say goodbye. Taken together, these stories serve as amazing examples of how to say goodbye with grace, dignity, and good humor.

Saying Goodbye is the first anthology in a new series from Dream of Things intended to fill the gap between popular anthologies of stories that are "short and sweet" and the Best American Essays series, which are longer form. Dream of Things anthologies are collections of quality stories between 500 and 2,500 words. Instead of short and sweet, these stories are short and deep.