Let's take a quick journey back to childhood!
Remember when you were young and impressionable? You viewed everything with wide eye wonder and you played fantasy games that had damsels in distress, pincesses and princes, kings and queens, castles and  far away kingdoms and even ....dragons. Celebrating our long past youthful days, today's blog is about Dragons. Or rather books about dragons.  The magic that they hold over us as children never really fades. What is your favorite dragon book or story about dragons?

The Dragons we read about and watch in movies are always so mysterious and powerful. Stories like Eragon, and In His Magesty's Service they were faithful. Some just rained down fire in a terrible fury like the ones in Reign of Fire and we even find them in paranormal fantasy masquerading as somewhat human like form like in Dark Curse by Christine Feehan. Tears of a dragon were said to have healing properties and they were known to be fierce protectors of shiny goldent treasures like the the dragon Smaug in the Lord of the Rings.

Dragon's Curse
The Dragon and the Scholar Saga, Book One
Fantasy/Romance

On her first assignment out of the Academy, young healer and scholar, Shannon Macaulay is summoned to the struggling kingdom of Regone to see to the wounds of a young but crippled king. When the unwanted attentions of an aggressive knight and the sudden appearance of a hated dragon turn her world upside down, she decides to take matters into her own hands even if doing so proves dangerous.

Finding herself strangely drawn to the company of the dragon, Gnaw, Shannon must force herself out of her safe world of books and botany to come to the aid of her unexpected ally in a strange kingdom, cursed by a fateful encounter with a dragon and the loss of a beloved prince.

Dragon's Debt
Scholar Shannon Macaulay and the Dragon-Prince Ewan have been traveling together for a year when their blissful companionship is interrupted by a cryptic message from their friend Martin.
"Come to Westshire. Edmond needs you."

Drawn to his brother's aid, Ewan finds himself hunting an elusive monster: a winged beast kidnapping young women and stealing their memories. Its latest victim is the Princess Brighid of Westshire, the very girl Edmond has recently fallen for, to the disapproval of her temperamental father, King Riley, and stoic brother, Prince Ryan.
Ewan is determined to rescue his brother's beloved, no matter what the cost. But when Ryan's eyes fall upon Shannon, the dragon realizes the cost might be greater than he is willing to pay.

Dragon's Rival
Having abandoned his friends and family and taken to the skies, Ewan hides himself in the Wilderlands, away from humans. However, an unexpected attempt on his life and a warning from another dragon lead him to suspect that not all is right in Regone.

Ewan returns to his homeland to attend his brother's wedding and discover the source of the bounty on his head. Once there the dragon prince finds that Ryan of Westshire has been using his absence to court the Lady Shannon.

With unknown forces working to undermine his brother's throne and his own heart torn between his love for Shannon and the desire to see her happy, Ewan must choose once and for all. Is he a dragon or a man?

Dragon's Bride
Dragon Prince Ewan has promised his beloved, Shannon, that he will become a man again or die in the attempt. Now he will do anything to make good on that promise.

With the aid of his scholarly friend, Martin, Ewan consults the great Dragon Queen Harviss, who offers him a unique solution: return to the past to find Ewan's Fey ancestor and beg for her help. Leaving Shannon behind, Ewan and Martin travel to a dangerous past and fall into the clutches of a powerful Fey queen.
Meanwhile, Shannon finds herself alone and with child. Unable to sit still with her husband absent, she joins with Ryan of Westshire in the prince's desperate search for his young son. King Riley, however, will see Ryan dead before allowing him to find the lost child.


Dragon lore for the young...

For true believers only, a lavishly illustrated reproduction of a legendary volume by the world’s most distinguished dragonologist. Don’t let it fall into the wrong hands!

Do you believe in dragons? Now, for the first time, the long-lost research of renowned nineteenth century dragonologist Dr. Ernest Drake is presented in all its eccentric glory, happily bridging the gap between dragon legend and fact. The meticulous Dr. Drake assigns Latin names to various dragon species, ruminates on why dragons are able to speak, speculates on how they could fly, and explains the true purpose of their notorious hoarding habits. Here are just a few of DRAGONOLOGY'S fascinating features:

In his afterword, Dr. Drake reveals that one of the crucial goals of dragonologists is to preserve the magnificent creatures of their study wherever possible - a goal this tongue-in-cheek volume most affectionately achieves. An incomparable gift for secret dragonologists everywhere!

I actually purchased this book for my son when he was into dragons many moons ago. Now he writes his own fantasy worlds and races. There are gorgeous illustrations and interactive pockets and flaps for any young dragon lover to explore. the back page has a clear marble eye in the dragon illustration. 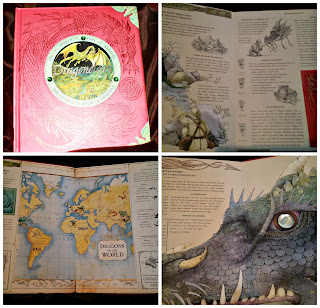