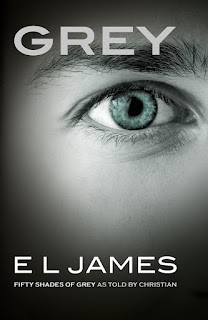 Many fans of the Fifty Shades of Grey trilogy were left a bit bereft at the end of the series, curious to know more about the elusive billionaire dominant Christian Grey. This was definitely not a series that made you want to say good bye to the MCs.

In his own words- CHRISTIAN GREY exercises control in all things; his world is neat, disciplined, and utterly empty – until the day that Anastasia Steele falls into his office, in a tangle of shapely limbs and tumbling brown hair. He tries to forget her, but instead is swept up in a storm of emotion he cannot comprehend and cannot resist. Unlike any woman he has known before, shy, unworldly Ana seems to see right through him – past the business prodigy and the penthouse lifestyle to Christian’s cold, wounded heart.

Will being with Ana dispel the horrors of his childhood that haunt Christian every night? Or will his dark sexual desires, his compulsion to control, and the self-loathing that fills his soul drive this girl away and destroy the fragile hope she offers him?

We as readers were treated with the motion picture earlier this year which set record box office numbers just like her books. But I think she knew even that was not enough. and I still say that some movies ruin good books. Be that as it may back to the good stuff...the release!

Grey: Fifty Shades of Grey as told by Christian by E L James will be available! June 18, 2015


If you have not had a chance to fall in love with the series by UK author E L James, it's not too late. Be prepared for adventure, emotional roller coasters, romance, sex, bondage, domination and submission. Sometimes though it's hard to tell who really is in charge.
It is still a romance and a love story... albeit 50 shades of F'd up.

How to spend the next 10 days:
Pick up your individual copies of  the series below and read each book in a 3 day time period over the next 9 days. Then and only then after you have read the books, See the movie.
Watch Fifty Shades of Grey

on Amazon Instant Video with Jamie Dornan and Dakota Johnson
Your eyes will rest just long enough for you to pick up Grey on Thurdsay June 18th.
These books contain (+18 Content) Mature content

When literature student Anastasia Steele goes to interview young entrepreneur Christian Grey, she encounters a man who is beautiful, brilliant, and intimidating. The unworldly, innocent Ana is startled to realize she wants this man and, despite his enigmatic reserve, finds she is desperate to get close to him. Unable to resist Ana’s quiet beauty, wit, and independent spirit, Grey admits he wants her, too...but on his own terms.
Shocked yet thrilled by Grey’s singular erotic tastes, Ana hesitates. For all the trappings of success—his multinational businesses, his vast wealth, his loving family—Grey is a man tormented by demons and consumed by the need to control. When the couple embarks on a daring, passionately physical affair, Ana discovers Christian Grey’s secrets and explores her own dark desires. Intended for mature audiences.

Daunted by the singular tastes and dark secrets of the beautiful, tormented young entrepreneur Christian Grey, Anastasia Steele has broken off their relationship to start a new career with a Seattle publishing house. But desire for Christian still dominates her every waking thought, and when he proposes a new arrangement, Anastasia cannot resist. They rekindle their searing sensual affair, and Anastasia learns more about the harrowing past of her damaged, driven and demanding Fifty Shades.
While Christian wrestles with his inner demons, Anastasia must confront the anger and envy of the women who came before her, and make the most important decision of her life.
Intended for mature audiences.

When unworldly student Anastasia Steele first encountered the driven and dazzling young entrepreneur Christian Grey it sparked a sensual affair that changed both of their lives irrevocably. Shocked, intrigued, and, ultimately, repelled by Christian’s singular erotic tastes, Ana demands a deeper commitment. Determined to keep her, Christian agrees. Now, Ana and Christian have it all—love, passion, intimacy, wealth, and a world of possibilities for their future. But Ana knows that loving her Fifty Shades will not be easy, and that being together will pose challenges that neither of them would anticipate. Ana must somehow learn to share Christian’s opulent lifestyle without sacrificing her own identity. And Christian must overcome his compulsion to control as he wrestles with the demons of a tormented past. Just when it seems that their strength together will eclipse any obstacle, misfortune, malice, and fate conspire to make Ana’s deepest fears turn to reality. Intended for mature audiences.

or save and get the Fifty Shades of Grey Trilogy bundle

So many books...Only two eyes- SL Thomson
Here is a list of upcoming movies that are based on novels