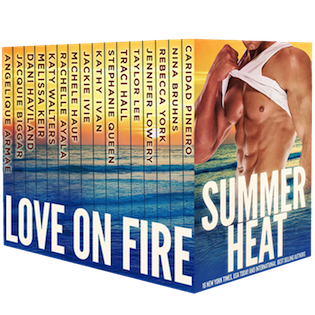 
16 All New Contemporary Romances from NY Times, USA Today, and International Bestselling Authors.
Guaranteed to make your blood run hot. Passion, steamy nights, excitement, and suspense. Something to suit every reader’s taste. Grab a cool drink (you’ll need it!), find a hammock, and curl up for an unforgettable escape.
1: Caridad Pineiro, Under the Boardwalk – A passionate night under the boardwalk brought them together, but can Chase and Natalie rekindle that lost love in just one night?
2: Nina Bruhns, Fast and Flirty – The top-secret package STORM Corps transporter Kade Maddox is hired to deliver turns out to be way more trouble—and a whole lot sexier—than he ever anticipated.
3: Rebecca York, Outlaw Justice – Will a surprise reunion with her old lover save her life when she flees from a homicidal husband?
4: Jennifer Lowery, The Fall (Book #2 ATCOM series) – The last thing ATCOM agent Brendan Devayne wants is to settle down, but Mia Lawrence makes him think twice…
5: Taylor Lee, Jared: (Book 1, The Justice Brothers Series) – The rookie cop learned the hard way that when tangling with the Justice Brothers, Justice—like Love– isn’t always fair or easy.
6: Traci Hall, Festival by the Sea – Al Cooper’s too bad to be a cop and too good to be a crook; Darcy Smith can’t get enough.
7: Stephanie Queen, Beachcomber Heat – This summer’s heat wave on Martha’s Vineyard is breaking records, but so is the crime wave. The combination is causing a wave of red-hot dangerous desire between Dane and Shana.
8: Kathy Ivan, Sex, Lies and Apple Pies – A televised baking competition brings them together. But deceit, intrigue and revenge are on this menu. Can their love survive?
9: Jackie Ivie, The Hunted – LeeAnn’s got business in Miami. Bring on the sun. Sand. Sexy men to look at. The last thing she expects is to be someone’s target.
10: Michele Hauf, The Geek Gets The Girl – Mistaken for the IT geek? This sexy CEO is about to learn the intimate operations of his company—up close, and personal.
11: Rachelle Ayala, Bad Boys for Hire: Ken (Bad Boys for Hire Series, #2) – After Jolie Becker is left at the altar, her friends secretly hire a hunky beach bum to cheer her up.
12: Katy Walters, Sands of Seduction – Clary escaped to a place of sea and sand, a place of passion and seduction.
13: Melissa Keir, Protecting Her Pigg – Arson and fire bring them together, but what will cause the most damage…the arsonist bent on revenge or their own stubborn ways?
14: Dani Haviland, Pool Boy Wanted (No Experience Preferred) – He’d never known a woman before, and that’s just how she wanted him.
15: Jacquie Biggar, Summer Lovin’ – Can two mismatched lovers find a way past their mistakes, or will they keep their lonely hearts forever guarded?
16: Angelique Armae, Dark Wolf – When Highland wolf Callen MacHendrie catches intern Miranda Kendrick stealing his prized sword, the term wild romp takes on a whole new meaning. 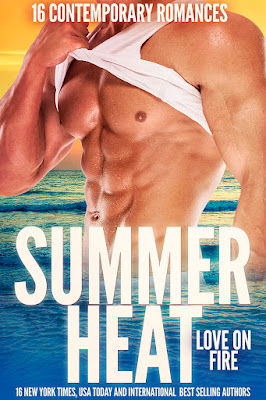 Excerpts from a couple of books included in this boxed set:
SANDS OF SEDUCTION
She took a deep breath; was there ever a good time? She must do it; accept it, not hide away anymore. Right now she needed a roof over her head and a job far away from the taunts and stares.
Clary heard the letterbox of the front door, snap shut. The post, it was never ending; every day she gathered up over half a dozen envelopes and yet more leaflets, more dead trees. As she slammed the spam into the recycle bin, a glossy photo caught her eye. Her heart leapt, just what she was looking for; a cottage for sale in a picturesque hamlet, nestling at the foot of a forest in the South Downs. It was half way across the country, but the further the better. She frowned reading the message, maybe it was just a general advert, but it seemed personal.
Delighted you are reading this. I invite you to make an appointment as soon as possible. Your dream cottage by the sea is waiting for you; within easy reach of Brighton and London.
Phone or email Cecil Partridge now, don’t hesitate.
02890 760723 cpartridge@tellomail.co.uk
After pouring a fresh cup of coffee, she picked up the leaflet, taking it to the small dining room, serving as an office. Sitting at the PC, she bent to stroke the head of her white retriever, gazing up at her with those brown soulful eyes. ‘Would you like to live by the beach? Run on the sands, swim in the sea?’
Lila raised her head, with a huge smile, a pink tongue lolling out of her black lips. ‘Yes you would wouldn’t you. Okay – let’s do it. Right now.’ Clary googled ‘MoveNow’, the best website for buying and selling houses or apartments. She tried to swallow the hurt; it seemed so strange searching for property without Theo by her side. It was impossible to ban the memories, the grief. Clenching her teeth, she rubbed away the tears stinging her eyes; dread welled up. Fight it Clary, fight it. Her chest tightened, as she forced herself to search the list of properties for sale. After only a few seconds of scrolling along, she recognized the hamlet. There was more information on the list; it was near a medieval market town with an ancient castle. The tiny village was a picture postcard, composed of cottages either side of a cobbled street, with a village store. The price was low and within her range. It was all she needed or wanted.

—
THE GEEK GETS THE GIRL
According to the wrinkled strip of paper taped over the original brass placard on the office door, Rachel Parker was the manager of the Paris Haute Heels office. Zac assumed Miss Parker was the woman who strode down the parquet-floored aisle between cubicles with the air of a confident runway model, red heels clicking smartly. Not even the weight of the office supplies she carried could lower her proud jaw. Juggling a coffee cup in one hand, file folders, binders, purse and briefcase in the crook of an elbow—not to mention a mouthful of pink phone messages—she shrugged by Zac where he stood in the doorway to her office, and lunged toward the glass-topped desk to release her burden.
The sleek bend of her body sprawling over the desktop begged attention. A clingy, dark blue dress hugged her from shoulders to mid-thigh, and he visually caressed the taut curve of her ass. Hmm, what did the French call it? Derriere. Nice. And when in France… His fingers cruised an imaginary stroll over the dangerous curves. Shifting into high gear, he hugged the corner and stepped on the accelerator, moving down around her thigh. Breathy pants encouraged his actions until—
Those breathy pants ceased, and the woman whose curves he’d just mastered in a matter of three fantasy seconds stood staring at him, green eyes narrowed in stern summation.
Conjuring a save to cover the distraction that had almost netted him the yellow flag, he tapped the paper taped over the door’s nameplate. “Snazzy décor you’ve got here, Miss Parker.”
“Cutbacks. Tightening the proverbial office belt. It works for me.” Long coils of chestnut hair danced over the spill of office ephemera as she nestled the paper coffee cup into a nook amidst the scatter. “And you have finally arrived.”
She caught his surprise and reacted, propping a manicured hand on her hip. “Seriously? How long does it take for IT to process a call for help? I know all eight private offices in this building share one tech department, but you must have more than one guy to handle service calls.”
“IT?” Nowadays, he generally put his fingers on sales figures, outlook charts, and the butter-soft leather in the company jet. Zachary Cosgrove had moved up from humble IT guy. Way up. “Oh, you assume—”

‘So you didn’t pull away when he kissed your hand?’
‘Oh no, quite the opposite, I wanted to kiss him. Honestly Ceci, I’ve read of that impulse in romance novels, but never got to grips with the heroine having feelings darting to her stomach and down to her groin. But, this guy’s  knocked me off my pedestal, I’m not the iron maiden I thought I was, in fact all I could think of, was his iron rod.’
‘Good god Clary, is that you talking? Really? You sexy thing.’
‘Hmm – I know I was mad with him, but the feeling hasn’t gone away either.’
‘So you’ll ring him then?’
‘Yes, I’ve cooled down now; I can see he was teasing me. I feel like ringing him, but honestly I don’t want him to think I’m a push over, or panting for him. He’s so dominant, he’d have my knickers down before I had chance to breathe.’
‘Wow he sounds incredible, ring him, go on, ring him – now.’
‘No, I have to be strict, make him wait. But he did say that if I didn’t ring him in three days, he’d come looking for me. Mind you he did beg and tease me, but underneath I think he really meant it, he will come looking for me.’
‘Go on; ring him, maybe he could help out at the Centre.’
‘Hmm I’m not sure, he has muscles in all the right places, well at least I hope he does.’
Celia shrieked, ‘Clary, gosh, you’ve got it bad.’
‘I know, I should feel guilty Ceci but all I can think of …. I’m not going to say anymore; I am overheating here.’
‘Okay, then let’s change the subject.’
‘No – no, first you’ve got to tell me about the guy you met, you promised.’
Celia blushed. ‘Well he was tall, with blond curls, in fact my heart was going nineteen to the dozen, he was an Adonis come to life. His eyes glittered, like quartz stone, if that’s the right word for them. He’s was such a zany character you know. Joking, laughing, but he was a wee bit weird.’ 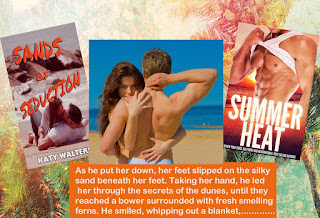