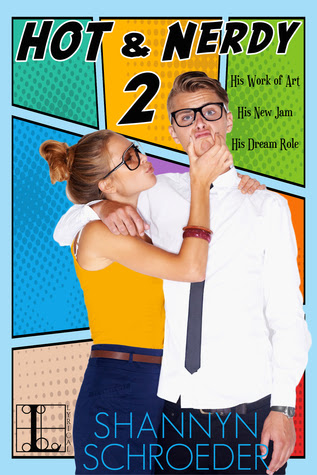 
Adam, Hunter, and Free have a lot in common, like geeky passions and not exactly great track records when it comes to dating. But a New Year’s Eve bash will bring everything they’ve ever wanted–and so much more . . .
His Work Of Art
Adam Hayes has never met a girl like Reese. She’s sassy, smart, and loves talking comics, although he can’t see why she’d choose DC over Marvel. He’s thrilled to finally put his artistic chops to use in their upcoming comic project. But when the two combine forces, they churn out magic in more ways than they had planned . . .
His New Jam
There’s something unusual about the sarcastic percussionist Hunter Reed hired for his band. For one thing, she’s impervious to his advances. But when Hunter sees how passionate Sydney is behind the drums, he orchestrates a plan to find out if she kisses like she plays. What he doesn’t anticipate is falling so hard . . .
His Dream Role
Free Mitchell loves the theater. When he’s masquerading as Dr. Who or Sherlock Holmes, he feels he can escape his shy, dorky persona. But nothing’s prepared him to play boyfriend to a gorgeous girl like Samantha Wolf. The more time they spend together, the more they seem to be going off the script, and the hotter everything gets . . .

Goodreads / Amazon / Barnes & Noble / GooglePlay / iBooks / Kobo
—
EXCERPT:
Hunter walked into his bedroom and bounced on the bed, waking Sydney.
She grunted at him. “It’s Saturday. And we played a gig last night. I should get to sleep in.”
“You did sleep in. It’s almost noon.”
She rolled over. “I hate morning people.”
Hunter laughed. Then he leaned over and kissed his way up her spine. “I have to go to Comic Con. I promised Adam I’d help out today.”
“So go.”
“Don’t you want to come, too? Free and Sam will be here soon. We’re all driving together.”
She rolled over and opened one eye to look at him. “Comic Con?”
“Adam and Reese are selling their book. It’ll be fun.”
She sat up and opened both eyes. “What the hell are you wearing?”
He stood and straightened his jacket. He picked up the hat he’d left on the dresser and posed. “I’m Indiana Jones.”
“Why?”
“Because it’s Comic Con. Dressing up is half the fun.”
“I thought dressing up was Free’s thing.” She reached for the coffee he’d set on the nightstand for her.
“It is. Except for today. I think I look good.”
“Yeah, except you’re wearing a leather jacket. In August.”
“The convention center will be air-conditioned.”
The doorbell rang. Hunter pointed at her. “You coming?”
“Yeah, sure.”
He ran to let Free and Sam in. Free was wearing his god-awful Riddler costume. Of all the things Free owned, this was the one Hunter hated. “Really? You had to wear that?”
Sam stepped from behind Free. “What would go better with Batgirl?”
Hunter rolled his eyes. “You’re such nerds.”
“We’re nerds? You’re dressed up, too,” she said.
“First, I borrowed this costume from your boyfriend and his nerd closet. Second, Indiana Jones is cool.”
Free pointed at him. “He’s a college professor and an archaeologist. I think by definition, that’s nerdy.”
“Whatever.” Hunter turned and yelled toward the bedroom, “Are you ready, Syd?”
Sydney came around the corner a minute later, wearing shorts and a T-shirt. “What the hell?” She waved her pointer finger at them. “I am not dressing like that.”
Hunter shrugged. “Suit yourself.”
He drove to the convention center since his minivan was more comfortable for them all to fit. This weekend was a nice break and end to summer. School was starting for teachers in a week and he couldn’t wait. Free had started working for his dad as expected right after graduation. Adam was the only one still in the same place.
Hunter really hoped the convention would give Adam the kick start he needed for his career. One of Adam’s biggest problems was that he was too cautious. He overthought everything. Hunter had really thought that adding Reese to his life would make Adam a little more easygoing.
Once they got into the convention center, Free said, “Adam and Reese are in Artist Alley. I’ll come by in a while. We have a couple of panels we want to get in on.”
With a nod to Hunter and Sydney, he grabbed Samantha’s hand and pulled her through the crowd. When he was gone, Sydney said, “He really gets into this, doesn’t he?”
Hunter nodded. “It’s easy for him to pretend to be someone else.”
“I haven’t seen him in costumes much lately.”
Hunter pointed them in the direction of Adam and Reese. “That’s because Cary doesn’t need the distraction at the health club anymore. And Free has Samantha, so he doesn’t need to impress anyone else.”
When they walked down an aisle of Artist Alley, Hunter saw Adam and Reese sitting behind a table. He sighed. Holding Sydney’s hand, he said, “They really need our help.”
“What?”
“Nobody’s paying attention to them.”
Syd smiled. “Maybe they should’ve worn a costume.”
Hunter stopped in front of the table. “How do you expect to sell anything sitting there like that? Where are your book things?”
“Dude, we tried talking to people. You have any idea how exhausting it is to try to grab someone’s attention?”
“Yeah, yeah. Gimme some books.”
Adam came around the table with an armful of the sample booklets they’d printed and stapled. “I’ll come with you. Sydney will stay with Reese, right?”
Syd rolled her eyes but nodded. She and Reese weren’t exactly friends, but they got along. As he and Adam stepped away from the table, Hunter heard Syd telling Reese about Free and Sam and the costumes. The girls’ laughter followed them down the aisle.
“I’m glad you’re here.”
“I told you I would be.”
“I know you’re busy getting ready for the school year. It’s cool that you made time for this. And convinced Sydney to come.” Adam blew out a breath.
Hunter took a moment to smile at a couple of women dressed as aliens and offer them a booklet. They each took one.
“It’s been a crazy couple of days,” Adam continued. “Reese and I split up yesterday to sit in on some workshops and I did pitch sessions.”
“Any luck?”
“Yeah, but that’s part of the problem. I think Reese and I went into this with different expectations. Or at least we have different ones now.”
“How do you mean?” Hunter paused again beside a group of women. “Excuse me. My artist friend here and his girlfriend wrote a really kick-ass comic. Here’s a sample.”
At first they looked startled that Hunter had interrupted them, but then they relaxed and each took a book. When he resumed walking beside Adam, he said, “And that, son, is how it’s done.” 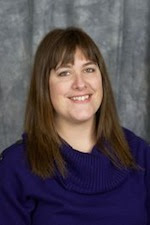 Author Bio:
Shannyn Schroeder is the author of the O’Leary series, contemporary romances centered around a large Irish-American family in Chicago and the Hot & Nerdy series about 3 nerdy friends finding love. Her new series (For Your Love) will release this summer with the first title Under Your Skin. When she’s not wrangling her three kids or writing, she watches a ton of TV and loves to bake cookies.