Publication date: April 5th 2016
Genres: New Adult, Paranormal, Young Adult
Goodreads
Limited Edition Paranormal Boxed Set
20 New York Times, USA Today, and International Bestselling Authors.
20 of today’s most magical, sought-after titles.
Yours for only $0.99.
Twenty Edgy Young Adult & New Adult Paranormal Tales
Twenty of today’s favorite young adult and new adult authors have come together to bring you a collection packed with full-length, spellbinding reads sure to keep you keep you on the edge of your seat and up way past your bedtime!
But reader beware: These novels take everything to the edge–and not just the edge of your seat. With authors who aren’t afraid to push the boundaries, you get stories that take everything to limit, creating whimsical reads that teens can actually relate to and that adults can enjoy, too.
Save over $50! This set is only available at this price for a limited time, so scroll up and grab your copy before it’s gone! 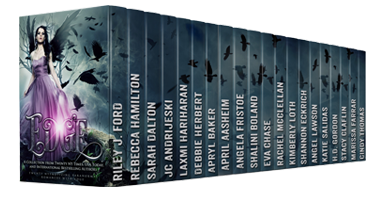 Here are a few bite sized snippets to entice you from the collection:

Caught in the Glow:
He dropped his gaze, swiped his fingers through his shaggy hair, and then
looked at me again. “It’s just the job,” he said. “That’s why you care.”

There was something needy in his eyes, a plea I didn’t totally understand.
But it pulled a little ache into my gut. I opened my mouth and hesitated,
and Colin shrugged.

The words slammed down, cutting me off, crushing any progress I’d made
with him in the last ten days. They knocked the breath out of me. So it
wasn’t that hard to honestly say, “No. Colin, I’d care—even if they took
me off duty right now, I’d want to know you were okay. Just because it’s a
job doesn’t mean you’re not a person to me too.”

He took a step toward me, closing that distance again, and this time there
was no ignoring the solid presence of him, that piney aftershave mingling
with the smoke still clinging to his clothes.

“Yeah,” I said. “I mean, at times a highly irritating person, but
frequently one I actually enjoy being around.”

A sliver of a smile touched his lips. “You’re never going to cut me a
break, are you?”

He paused. “No. I want…” The sentence hung unfinished in the air between
us. Then, without warning, he caught me by the waist, spun me to the side,
and sat me on the edge of the table.

I barely had time to let out a stutter of a laugh and a “What—” before his
lips captured mine.

Changeling:
The blood moon of October cast shimmering beams, tingeing the treetops with crimson.  By Halloween, it would reach fullness, and the balance of good and evil in the Fae kingdom would be in peril as the veil between human and spirit worlds would be at its thinnest.  An in-between, middling time.  A dangerous time.
But Kheelan was used to being in two worlds at once, yet belonging to neither.
What was wrong with him?  You’d think he’d never seen a beautiful girl.  Besides, even the prettiest human couldn’t compare to the enchantment of any run-of-the-mill fairy.  And he should know.  The daoine-sith Fae rewarded him with a fairy lover whenever he completed a dangerous mission, as if rewarding an obedient dog with a bone.
Kheelan smoldered at the humiliation.  His skin burned from it, his mouth scorched from the angry words he must never say aloud.  They had stolen him from his human family. He’d no doubt been sleeping unaware the night those cradle robbers came and forced him into a lifetime of servitude and danger.
He got nothing in return.  No love, no acceptance, and no hope of a future.   Indeed, they despised him.
Changeling.  How he hated the word, been taunted with it, as if it was some kind of deformity on his part.  A mere changeling, only tolerated for what he could do in their petty wars or their unending, menial labors.  He summoned his enormous will and pushed the bitter thoughts away.  Deep in his mind was a place no one could enter, a refuge he refused to let them destroy.  A soul some might call it.  His and his alone.
Musical notes vibrated from the girl’s apartment. It was dramatic, haunting even.  He appreciated that it was worlds different from the incessant Celtic flute, or worse, the brain-splintering bagpipe music his captors so adored.  Kheelan closed his eyes and let the melody wash over his senses.
When the music stopped, he glanced at the window where the light extinguished.  He yearned for the light, the music, and for the unknown human girl curled up in bed, unknowing and uncaring of the forces swirling around her.  But the human was a suspect, one of many to investigate.
Somebody was murdering the pixies.  His job was to find out who and why and bring them to the Fae’s royal Seelie Court.  Should he fail . . . well, even the good Fae had their ways of punishing. His purpose was to mingle with his fellow mortals, searching for information to assist the good Fae in their unceasing war with the Unseelie Fae.
Time to leave. He would come back tomorrow night.  Samhain, the witch’s Halloween, drew nearer, each year more sinister than the one before.  His instructions from the Seelie Court Fae, his owners, were to find the culprit before Samhain.  Or else.  Kheelan wrapped the deep maroon duster tightly around his lithe body and disappeared into the night to join the unsuspecting, blissfully ignorant, human mass.

Fractured Light:
The house was completely black except for a faint light glowing from my bedroom. We slowly made our way toward it.
“Do you feel anything?” Christian asked.
“Actually I don’t. I don’t think he’s here.”
Christian pushed open my door, and, like me, seemed to be trying to figure out exactly what we were looking at.
On my bed, sitting with crossed legs, was Tracey in her green prom dress, her head cocked to the side. A single lit candle on my nightstand cast dancing shadows across the room. They were the shadows of the dead. I recognized them immediately and stepped forward.
Christian grabbed me. “Don’t!”
I pushed his hand away. “Tracey?”
There was something around her neck. A red scarf? I reached to touch her.
“Llona, no!” Christian cried.
As soon as my hand touched her shoulder, Tracey fell backwards onto my bed.
Not a scarf. A slit throat.

Get more excerpts from this collection  on www.weddingsbooksnwine.com  and on www.facebook.com/WhoSheReads

AND there is a Give away!

this blitz is sponsored by: