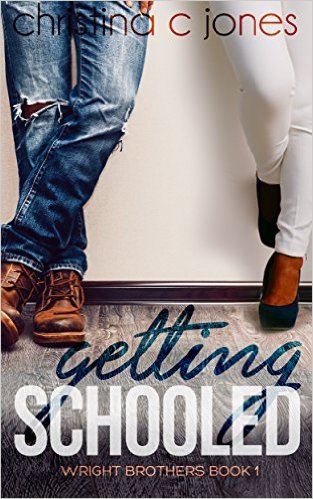 When 26 year old Reese accepts a position as a grad assistant, she has no idea an unpleasant encounter with a student will lead to the discovery of what she calls “the trifecta”: fine, intellectual, and a little bit rude – three qualities she finds irresistible in a man. She has no intention of doing anything with that discovery – nothing long term, at least. But everybody knows what happens to best laid plans.

Jason is a grown man. 28 years old, seasoned and scarred by his real-life experience in the world, he’s at Blakewood State University to finish his degree and move on. The last thing he’s interested in is the female population on campus… but sexy, infuriating Reese might be a notable exception.

This isn’t a story of opposites attract.
More like counterparts clash.
Neither of them is afraid to do battle, and neither is willing to back down. Love and war, win or lose… somebody’s gonna end up getting schooled.  Get it on Amazon