Soul of a Slave: Madison Washington and The Creole Mutiny 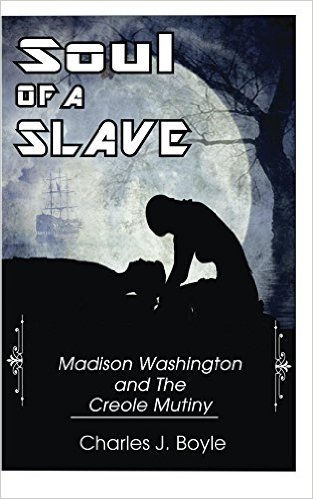 Madison Washington escapes the cruel slave pens at The Forks of The Road, near Natchez, Mississippi. Running day and night through heavy forests to avoid his pursuers, he finally makes his way to Canada and freedom via the Underground Railroad. When he learns that his beautiful wife, Milinda, is being sold to slave merchants in New Orleans, he returns to the south to rescue her. A perilous journey takes him to Virginia where he finds Milinda aboard the slave brig, Creole. Madison foments a mutiny while at sea. He seizes command of the ship and sets sail for Nassau in the Bahamas, free British territory. Threatened with hanging for his actions, he eloquently exposes his soul to his captors, catching the attention of Queen Victoria who has the authority to free him and his band of mutineers.

This book was originally published as an Amazon eBook under the title, Madison Washington and The Creole Mutiny. This new, updated tale of courage and daring is based on the actual Creole mutiny, November 7, 1841. It is perhaps the largest and only successful slave revolt in the history of that vile system. This fictionalized account of Madison Washington will enrage you at the injustices of slavery, but it will also warm your heart by the love and camaraderie shown by the slaves toward one another.

There is not much known about the day to day life of Madison Washington. That he was of great physical stature and was eloquent in his speech—that he did in fact cause a rebellion aboard the Creole and sailed to the Bahamas where he was imprisoned and sentenced to hang—are indisputable facts. The audacity of Madison Washington is briefly mentioned in Frederick Douglas’, The Heroic Slave, Autographs for Freedom, and there is some mention of him in Henry Wilson’s, History of The Rise and Fall of the Slave Power in America. Old newspaper accounts, court records, and a bit of scholarly research afford us the opportunity to wrap the actual events of this monumental moment in African American history around a fictionalized account of Madison Washington, the man.

His story will thrill you! He is bold, determined, and daring. He powerfully articulates the value of a Black man and proves the sheer senselessness of slavery. Come with Madison as he breaks free from human bondage and takes 140 of his fellow slaves into a life of freedom. Get it on Amazon