Jude and Jillian answer the age old question. Would you date your brother's best friend? 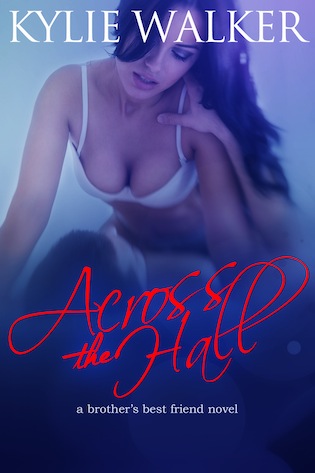 Synopsis:
Jude Falken has just been released from prison on good behavior. He’s hot as hell, owns one of the largest fashion empires & has women coming and going day and night. A delivery girl that shows up at his loft leaves him intrigued.
She’s gorgeous, shy & totally off limits.
She’s his best friend’s little sister.
Jude knows better, he swore he wouldn’t go there.
After returning from a year long internship in Paris, Jillian Warren is back in her hometown of Manhattan and steering clear of men. Her new neighbor has her curious, wanting to know more. Her roommate & brother keeps telling her stay away but she can’t. As their worlds collide, Jillian soon finds out there is a darker side to Jude and she will soon be fighting her own emotions and memories of the one man she left in Paris. Her past will soon catch up with her. She will be forced to decide.
Big brother’s best friend or the hurtful memories of her past in Paris.

Excerpt:
Jillian sat down on his plush new sofa and said, “Your apartment is really nice. Did you decorate it yourself?”
He nodded. “I did. I’d much rather have what I like on the walls than what some decorator tells me I should have.”
“Me too,” she said, honestly. “You have a great eye for colors and space…what is it you do for a living?”
“I’m into fashion like you,” he said, taking a seat on the other side of her. He was less than three feet away now and she was alone in his apartment. That wouldn’t be so bad if she didn’t keep picturing herself locking lips with him. She hoped that he couldn’t see her sweat as her internal temperature continued to rise. He didn’t say any more about his job so she said,
“So you bought the Galvan in Paris. Was that your first trip there?”
“No, I’ve been there a lot. I love it there…just the atmosphere and all of the culture.”
Jillian remembered saying that exact thing to Maddy a couple of weeks ago. She was realizing that she and Jude actually seemed to have a lot in common. “So do I,” she said. “I saw so many great art and fashion shows while I was there.”
“Did you get to be there for fashion week?”
“I did! I got to see a show at the Carrousel du Louvre!”
“I was at that one. It was great!”
Jillian found herself wishing she would have met him then. Maybe she would have never met the other man that she’d spent her summer with and left broken-hearted. They talked for half an hour about the fashions coming out this year and she asked him about his family.
“My father passed away a few years ago. It’s just me and my mom now. I’m an only child.”
“Oh, I’m not sure what I would have done without Ethan.”
“Where is that brother of ours?” he asked with a wink.
“He’s in Las Vegas…Sin City for three weeks.”
“Uh oh, look out!”
She laughed. “And that is as much of my brother’s exploits that I want to discuss.” She sat her empty glass down and stood up. “Thank you for the drink Jude, and the conversation. I should take off…”
“So soon?” He stood too and gave her a hot, smoldering look that ignited the fire in her belly.

She was suddenly burning up from the inside out. She had to go…or she wasn’t going to. She smiled and stepped past him. She felt him right behind her as she reached for the door handle.

“Jillian…” his voice was deep and sexy and she knew turning towards him was going to be a mistake…but she did it anyways. As soon as she did his lips met hers and he nudged her back against the wall. She parted her lips and he pressed one hand into the wall and wrapped the other around her waist and pulled her into his hard body as he let his warm, wet tongue snake into her mouth. The taste and the feel of him was intoxicating and before long her own hands were feeling the hard flesh of his back and sliding around to trace the outline of his chest muscles underneath his shirt. She felt him lifting her skirt up and something in her brain was telling her to stop him…but her body was in charge at the moment.
He touched the crotch of her thong and her body exploded in a gush of warm fluid and chills that ran up and down her spine. He rubbed her through her panties and she couldn’t bring herself to tell him to stop. It felt so good and she wanted him so bad…when his fingers slid underneath the elastic and made contact with her hot flesh, her head felt like it exploded. He slid the hand on the wall down and gripped her ass with it as he used his fingers to pleasure her.

The whole time his tongue wrestled with hers and explored every curve and crevice of her mouth. It didn’t take long before her body was shaking and she was crying out in ecstasy as the orgasm washed over her in wave after wave of pure bliss. Jude waited for her to stop shaking before pulling his hand back and moving his mouth over to the side of her face next to her ear, “I need to see you again,” he whispered in a strangled voice.
Jillian couldn’t stop shaking. She wasn’t even sure her legs would carry her across the hall. In a voice she hardly recognized she said, “I have to go.” She turned the door handle behind her and Jude took a step back and watched her go. The desire she saw on his face burned through her like a hot poker. Who the hell is this man?

Get your copy now

A little about the author:
Subscribe to Kylie's list here by copying and pasting in the url: http://bit.ly/1zUsi4l

A true Canadian at heart, although I love to travel anywhere warm.

I am a book addict, coffee addict, a wine addict and a writer!

All 6 parts are live!

You can connect with me on: